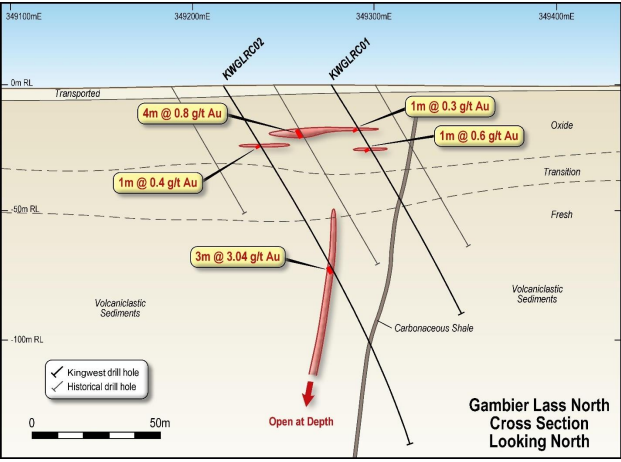 The company notified that the follow-up drill would be required to delineate additional primary and supergene mineralisation, and upcoming programs would focus on extending the known mineralisation to the north-west and south-east of the current drill hits.

KWR reported that a program of 13 holes totalling 2,073m, combined with re-logging available historic holes has resulted in an updated geological interpretation for the Crawford mineralisation, earlier interpreted as a series of shallow, west dipping, stacked lodes.

The company re-interpreted that the recent drilling program has resulted in bulk near surface free-digging ore body, and primary mineralisation intersected in hole KWCRC08. KWR believes host conglomerates are altered and bleached with trace pyrite; apparent is the erratic distribution of gold mineralisation, and oxidised mineralisation displays increased continuity due to remobilisation of the gold, which is the main exploration target.

The company asserted, a new Mineral Resource Estimate (MRE) has commenced after the procurement of new information and updated geological understanding. Also, MRE includes re-modelling the oxide interpretation, re-modelling of a series of stacked lodes, and this would be followed by mining study focussing on the open-pittable oxide mineralisation.

King of the West

Reportedly, KWR completed a program of 7 holes totalling 980m, which targeted high-grade mineralisation beneath old workings within King of the West and Queen of the West vein systems, as reported. Also, the drilled holes targeted the extensions to the prior announcement related to the intersection.

Further, it was reported that a partial consideration for the recent drilling campaign from the supplier would be the issue of 606,060 fully paid ordinary shares to a supplier at issue price of $0.165 per share in lieu of cash payment under the placement capacity of the company.