Kalamazoo Resources Limited (ASX: KZR) gets recognised for its Greenfields exploration work as its application for participation in the Federal Government’s Junior Minerals Exploration Incentive (‘JMEI’) scheme has been accepted.

Australian Taxation Office reportedly advised that the gold and base metal explorer Kalamazoo Resources is now rightful to participate in JMEI scheme for the 2019/2020 tax year and is entitled to receive an allocation of up to $825,000 in tax credits.

Listed on the Australian Securities Exchange in January 2017, Kalamazoo Resources operates under metals and mining sector, with the focus on identifying commercial mineral deposits for gold, copper and base metals exploration.

Let us learn about the company’s core projects and its recent progress:

Castlemaine Gold Project, located in a well-supported mining region at Castlemaine, adds a significant gold project to Kalamazoo’s portfolio at an extremely low cost. During the March 2019 quarter, the company continued its search for gold tenements within the Castlemaine Project area and identification of the same involved undertaking follow-up exploration initiatives. The discussions with consultants for the provision of drone aeromagnetic surveys and ground Induced Polarisation (IP) has been commenced to go as per the proposed Q2 2019 exploration program.

At Castlemaine Goldfield, Kalamazoo produced 5.6 million ounces of gold that includes extremely rich 4.5Moz alluvial goldfield, but only limited underground mining (1.1Moz) with the largest underground operation of 411,000ozs @11.1g/t Au. The company further confirmed the outcropping geology and gold mineralisation potential at Castlemaine Goldfields, existing in repetitions at depth and along strike. 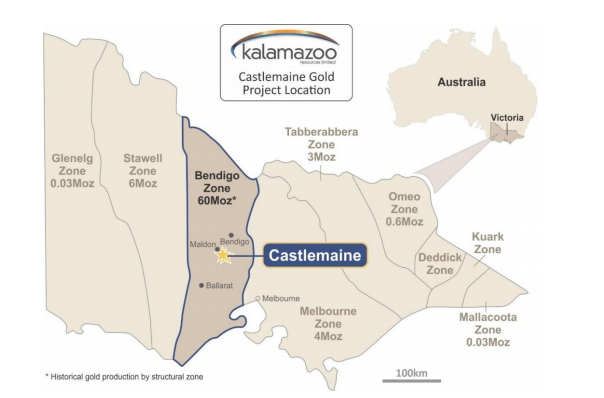 Kalamazoo’s efforts to work in collaboration with CSIRO has been a piece of commendable news for investors to look at. During the March 2019 quarter, the company executed a collaborative research project agreement with Commonwealth Scientific and Industrial Research Organisation (CSIRO), an independent Australian federal government agency responsible for scientific research, to map mineral gradients and prospective vectors for the mineralisation of gold at the Wattle Gully Gold Deposit within the Castlemaine Gold Project, Central Victoria.

Last year, Kalamazoo acquired ~80%-100% ownership in the equities of three highly prospective gold projects in the Pilbara Gold region. These tenements reportedly have the potential to host substantial gold mineralisation and are strategically well placed near some of the Pilbara’s developing gold projects.

During the March 2019 quarter, the company decided to spend time in the review of recent fieldwork conducted over the last 12 months instead of taking up any new fieldwork during the period. The company focused on identifying the target areas within its Pilbara projects (Sisters, DOM’s Hill, Marble Bar Gold and Yule Project Tenements) and develop an exploration plan, including mapping, soil and rock chip sampling programs, and further geophysical modelling. 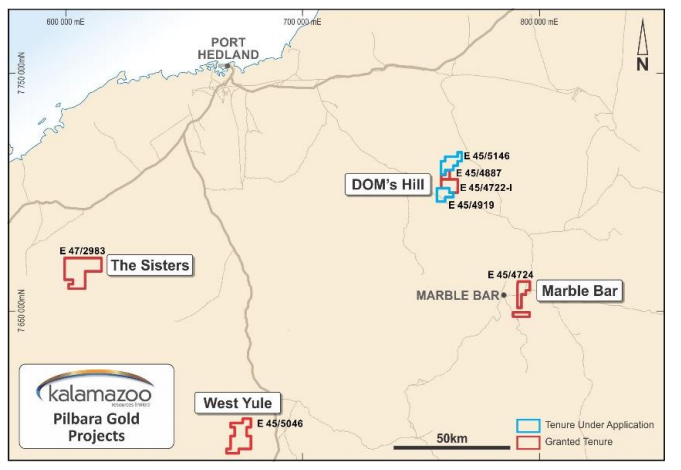 The Cork Tree Project is located in the Glengarry region, 120 km north-northwest of Wiluna in the Doolgunna province. Also, its placement is approximately 830km northeast of Perth with DeGrussa ore processing facility of Sandfire Resources (ASX: SFR) located some 30km west of the project area. 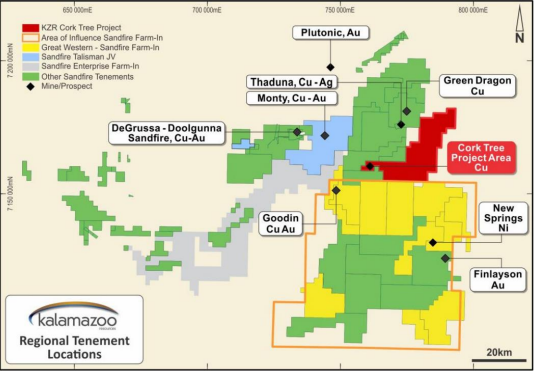 Following the acquisition of Atlas Iron’s 49% share of two joint venture tenements in December 2018 quarter, the company completed its drilling program at the Cork Tree Copper Project during the quarter ended 31 March 2019.

Kalamazoo’s exploration program is statedly directed towards the development of new base metal targets with the Cork Tree Copper Project through conducting regional geochemical and geophysical surveys over the regions which remain underexplored.

In December 2018, Kalamazoo announced the divestment of its Snake Well Gold Project, located in the Murchison region of Western Australia, to the private entity Adaman Resources Pty Ltd for a sale consideration of A$7 million.

Subsequently, the sale transaction was reportedly completed in February 2019 and the $7.0 million sale proceeds are stated to paid over 24 months. But it’s worth noting that KZR retains a 2.5 per cent royalty of net smelter on any base metals mined within the Snake Well project area.

The company explained that the Snake Well’s sale is in support of funding its exploration and drilling activities on its Victorian Gold Projects, primarily including the Wattle Gully Gold Project.