Western Australia-based innovative tech company, K2fly Limited (ASX: K2F) is a consulting systems integrator offering Software as a Service (SaaS) based solutions to Tier 1 clients. The company is committed to support and solve problems for businesses specifically operating in the asset-intensive sectors such as Rail, Electricity, Gas, Water and Resources.

On 15 August 2019, K2fly announced to the market that Glencore Canada Corporation, a subsidiary of the Swiss multinational Glencore plc, had signed an agreement for the implementation of RCubed Resource Governance SaaS solution. Under the agreement, K2fly would deploy RCubed across the Glencore Canadaâs reporting lines for its Resources and Reserves in global Zinc operations across 56 sites in 7 countries worldwide. The implementation of the contract is to commence immediately and the cost for the same is over AUD 250,000 in the first year and is renewable on an annual basis (recurring revenues).

The contract with Glencore Canada is of high strategic importance for the company.

Glencore plc operates across two natural resources segments, including Metals & Minerals and Energy and is one of the five leading miners in the world. It is listed on the London Stock Exchange (LSE) in the United Kingdom and Africaâs oldest and largest, the Johannesburg Stock Exchange (JSE). According to the Groupâs Production Report for the first half of 2019 (H1 2019), the own sourced zinc production was achieved at 535,900 tonnes (own sourced sales: 476,900 tonnes), up 8% by 37,700 tonnes as compared to H1 2018, driven primarily by the contributions from Lady Loretta mine at Mount Isa, located in the Gulf Country region of Queensland, and a stronger performance at McArthur River, located in Northern Territory, Australia.

K2flyâs journey with RCubed: It has only been two months since K2fly finalised the acquisition of South Africa-based Prodmark Pty Ltd and its related entities in early June 2019, with respect to the RCubed Resources and Reserve Reporting software that supports multiple reporting codes - JORC, NI43101 and SAMREC, across 5 prominent stock exchanges âNYSE, LSE, TSX, ASX and JSE. The consideration for the transaction included AUD 450,000 of advance payment and preservation of key operational personnel for the next three years with performance incentives.

Immediately following the acquisition, K2fly signed up Imerys SA, a French multinational company, on board for the deployment of RCubed solution across its mineral sand operations in over 80 locations in 25 countries worldwide. The contractâs initial implementation is over AUD 150K in the first year with recurring revenues to follow annually.

The addition of RCubed boosted the companyâs suite of SaaS-based offering, which initially comprised Infoscope, providing a smarter way to manage land, delivering governance, risk & compliance and engaging the stakeholders with spatial intelligence.

Now, the combination of Infoscope and RCubed is a comprehensive one-stop solution, with little market competition, for the Energy and Resources sector businesses to deliver their sustainability reports and fulfil the Environmental, Social and Governance (ESG) obligations, thus reinforcing their social license to operate on the lands. 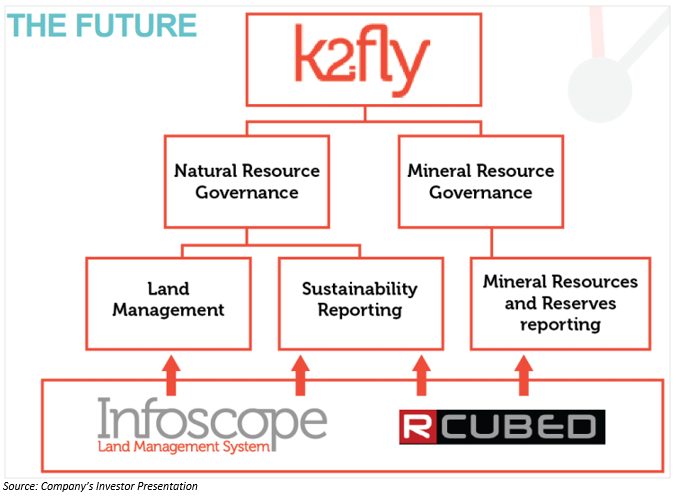 Financial Update: K2flyâs primary objective is to achieve global leadership in ESG and generate more revenues from high-margin SaaS sales. In line with that, K2fly reported a 52% improvement in raised invoices for Q4 FY19 at $ 1.49 million, taking the total invoices raised for FY19 to $ 4,144k, which is 61% higher than $ 2,574k raised in FY18. The cash at hand as at 30 June 2019 was around $ 1,060k along with $ 850k in aged receivables from Tier 1 clients. As of the release of the report on 31 July 2019, the company also had an additional $50k of work in progress with existing clients, to be invoiced on delivery. 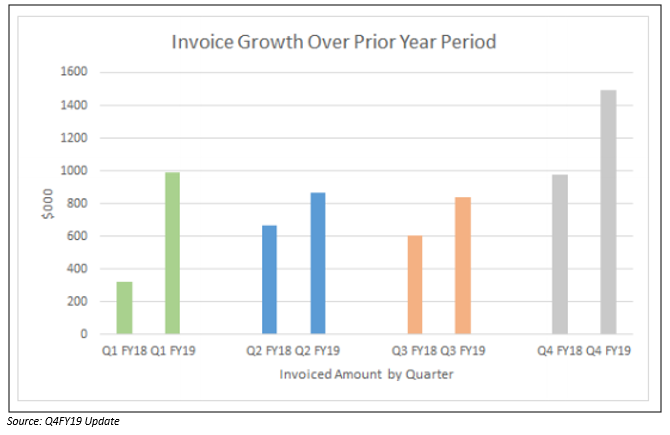