Jervois and eCobalt to combine under the Arrangement Agreement, updates on New Jervois

On 2 April 2019, Jervois Mining Limited (ASX: JRV), the mining exploration company, announced that Jervois and eCobalt Solutions Inc. (listed under TSX) had signed an arrangement agreement under which both the companies will combine, under the Business Corporations Act (British Columbia).

As per earlier announcement made by the company on ASX, Jervois Mining entered into a definitive agreement with M2 Cobalt Corp, under which the companies will merge in an at-market transaction. Under the arrangement, Jervois is expected to take over all the shares (issued/ outstanding common shares) of M2 Cobalt. At present, around 50% of the outstanding shares of M2 Cobalt have signed customary voting agreements supporting the M2 Cobalt merger, and no approval from the shareholders of Jervois is required.

Both the mergers are not related to each other. The company, however, confirmed that the merger of M2 Cobalt will proceed as per the previous announcement and is expected to be completed before the completion of the transaction between Jervois and eCobalt Solutions Inc.

Highlights of the Transaction

The completion of the transactions will result into enhanced geographic and asset diversification by combining development-stage Nico Young assets in Australia and Idaho Cobalt Project (“ICP”) assets in the US with assets in Africa from previously announced M2 Cobalt Merger. 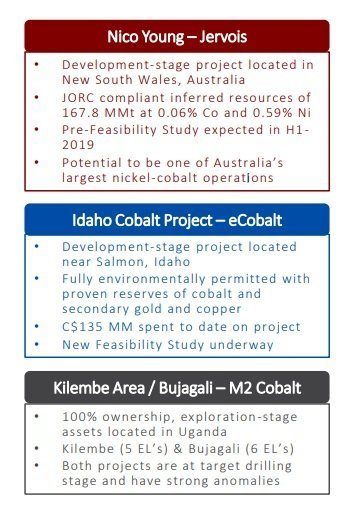 After the completion of the transaction, the board of directors from pro forma company, i.e. New Jervois will include three nominees from Jervois as well as two from eCobalt. In New Jervois, Mr Peter Johnston who is the Chairman of Jervois and Mr Bryce Crocker, who is the CEO of the company will continue the same position.

The company is presently listed on ASX, and it will be seeking its listing on the TSX Venture Exchange (“TSXV”) which will be providing access to Australian as well as North American mining capital markets.

On 1 April 2019, the company announced the trading halt on its securities regarding the pending corporate transaction. Post the announcement, by the end of the trading session on 2 April 2019, the securities started trading. The company’s stock price zoomed up by 21.739% and closed at A$0.280. Today, the stock is trading flat at A$0.280 (as at 2:45 PM AEST, 3 April 2019). The company has a market capitalization of A$62.51 million and approximately 223.26 million outstanding shares.