On 15 December 2020, another batch of IPOs, Akora Resources Limited & Liberty Financial Group, made its debut on the ASX in this IPO-frenzy market -. Both companies were cheered, and listed on a premium followed by further intraday gains.

Akora Resources Limited (ASX:AKO) is a Melbourne-based mineral exploration company, which made its debut at A$0.32 at a healthy premium of 28% after its oversubscribed IPO of A$5 million.

However, the left-out investors in the IPO seemed to be in a hurry to grab their hands on Akora’s share; as a result, the stock shot up to the day’s high of A$0.50. Currently, the stock is trading at A$0.40 with the trading volume of more than 6 million shares.

The company was able to pull off a successful IPO of A$5 million via issuing 20 million shares at an offer price of A$0.25. After the issue, the total no of equity shares of the company has increased to 59.42 million with the market capitalisation of A$14.8 million.

Use of the funds

The net proceeds from the existing cash would amount to A$5.63 million. In the first year, the company plans to utilise A$3.1 million out of which almost 3/4 or A$2.28 million would be used towards the direct exploration and drilling. 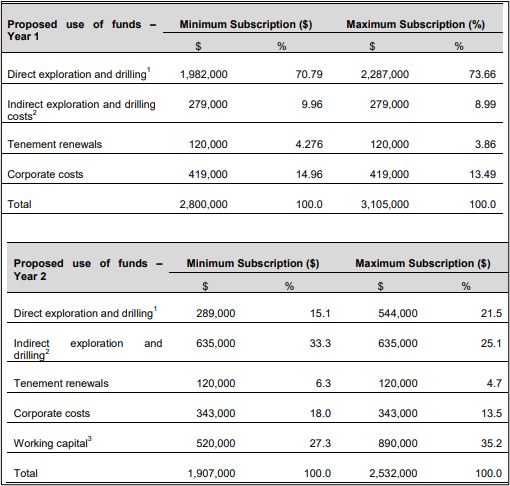 The remaining amount of A$2.53 million would be spent in the second year, with 35% of it being used towards the working capital.

The company offered a total of 53.4 million shares at an offer price of A$6 per share. The company has successfully raised a total of A$320.7 million from the IPO (before cost). After the issue, the company is having a total of 303.6 million equity shares, all of which are equally ranked with each other.

Purpose of the offer

The proceeds from the offer would be utilised towards the payments to Vesta apart from the transaction cost of the offer. The capital markets would also provide the company flexibility to pursue further growth opportunities.

After this listing, the eligible employees of the company would directly be able to participate in the equity ownership.