Incorporated on 20th March 2015 as an investment holding company, iCandy Interactive Limited (ASX: ICI) develops and publishes mobile games and digital entertainment for a global audience. The company has a broad portfolio of mobile games that are being played by more than 350 million mobile gamers across the world. Some of the games under iCandy’s portfolio include Star Girl Games, Astro Boy Games, Appxplore (iCandy) and Inzen (iCandy). 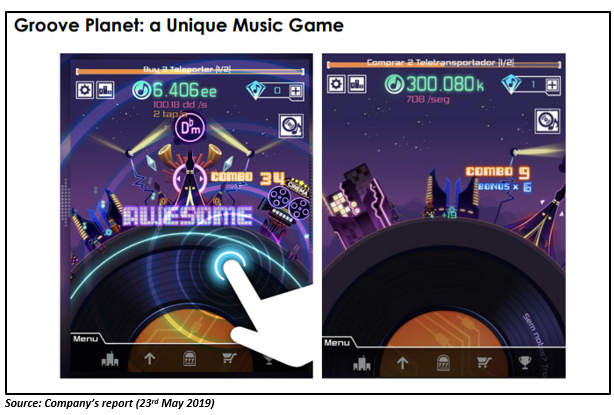 Groove Planet is a unique music game that plays one’s music, examines each track with the help of chord recognition technology and makes use of the characteristics of each song to deliver a unique music-based entertainment experience. It can also be termed as an alien world-building rhythm game.

The mobile game ‘Groove Planet’ was earlier acquired from Animoca Brands by iCandy. iCandy owns the exclusive global rights of the game while Animoca Brands (iCandy’s substantial shareholder) is the record holder of its ownership rights.

The revenue generated by the ‘Groove Planet’ in the Chinese market will be shared by 9Games and iCandy (on commercial terms), while Animoca Brands is eligible to a slice of the proceeds collected by iCandy.

iCandy’s Chairman Mr Kin W. Lau informed that the company is developing strong collaboration in the international gaming market and is looking forward to having more collaborations with Alibaba’s 9Games.

With confidence over the rapid growth of video-capable social media across the globe, iCandy also executed an Investment Agreement with Xcademy Ltd recently to acquire a 20 per cent stake.

In its recently released annual financial report for the year ended 31 December 2018, the company reported higher revenue and lower loss from ordinary activities compared to the previous corresponding. The operating loss for the FY18 narrowed to approximately $1.15 million compared to $1.87 million in FY17, while the revenue increased from $1.66 million (FY17) to $2.82 (FY18).

A Global Collaboration and Distribution Agreement was signed between iCandy and Emerge Gaming Ltd (ASX: EM1) on 21st March 2019 to build and operate mobile games focused on EM1’s eSports platform. A new eSports tournament ‘iLeague’ was to be developed under the Agreement utilising iCandy’s game content and technology based on the Arcade X Platform.