Despite some challenging business conditions, the company was able to deliver solid performance during the year. For the full year, the company reported revenues of $434 million, which was 9% higher than the previous corresponding period (pcp). The revenue was mostly generated from the Automotive and Davey businesses, which recorded limited organic growth. The revenue was also driven by stronger growth from acquisitions. Further, the company’s NPAT from continuing operations increased by 18% to $60 million over the period. For the first half of FY19, the company has reported 13% growth in its revenues from continuing operations. 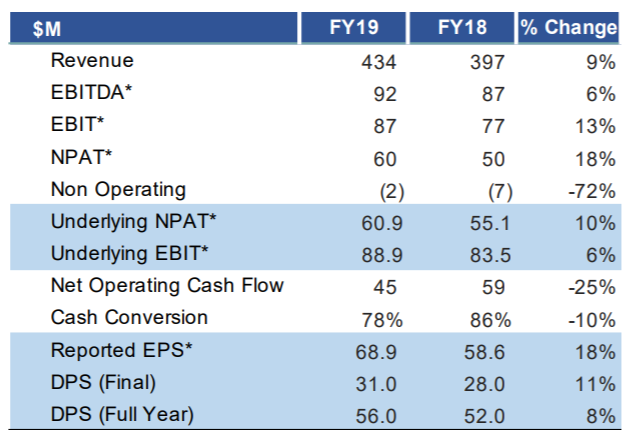 The company witnessed a decline in its reported net profit after tax, which went down by $42.2 million during the year. The company’s net debt grew to $132.7 million in FY19 from $92.4 million in pcp, mainly due to the acquisition of Disc Brakes Australia, further investment in Liftango, and an increase in net working capital in the first half of the year.

For FY19, the company reported the cash flow from operating activities of $44.5 million. It is to be noted that during FY19, the company witnessed an increase of $11.6 million in tax payments. The cash conversion was lower this year, mainly due to higher inventory levels across several businesses to support growth and due to the impact of a number of resellers either destocking or holding back on orders.

The company’s Board has announced a final dividend of 31 cents per share fully franked, which is 11% higher than the last year’s final dividend, taking the total full year dividend to 56 cents, which is representing a payout of 80% on underlying basic earnings per share from continuing operations.

Automotive Segment: Despite operating in a challenging environment, the company’s automotive business delivered sales growth of 12% in FY2019. This growth included 1% organic growth and remaining from the acquired businesses. Both Ryco and Wesfil reported around 4% revenue growth in FY19 as compared to pcp. In July 2018, the company completed the acquisition of Disc Brakes Australia (DBA), a market leader in premium disc brake rotors. DBA finished the year well ahead of the expectations with double-digit growth in both domestic and export sales. Its excellent export result was recognised by the Automobile Aftermarket Association of Australia, awarding the company a Silver Award for Exporter of the Year.

The company’s another acquired business, Brown & Watson reported flat sales over the prior year, impacted by a loss of some low complexity commodity items to home brands and reseller inventory holding level caution in the second half. This business was also awarded PACCAR’s Parts Supplier of the Year and Kenworth’s Supplier of the Year (Category B).

Through its acquired business, the company intends to improve its margins over the medium term.

Despite a slowdown in the new vehicles sales, the company believes that Automotive Aftermarket is still a positive and defendable position for GUD to operate within.

Davey: In Davey division, the company reported 3% growth in full year sales revenue to $104.1 million while its underlying EBIT increased from $9.2 million in pcp to $9.4 million in FY19. The sales revenue growth during the year was driven by several factors, which include:

The company is going to keep its focus on business fundamentals, including operational effectiveness, product innovation, refreshing existing products, design for manufacturing and supply chain efficiency, and the commercialisation of the Modular Water Treatment technology.

Following the release of its full year results, the company’s stock witnessed a decline of 3.955% during the day’s trade (AEST 3:15 PM).

CLICK HERE FOR YOUR FREE REPORT!
Tags:
News consumer GUD
All pictures are copyright to their respective owner(s).Kalkinemedia.com does not claim ownership of any of the pictures displayed on this website unless stated otherwise. Some of the images used on this website are taken from the web and are believed to be in public domain. We have used reasonable efforts to accredit the source (public domain/CC0 status) to where it was found and indicated it below the image.