GrainCorp Limited (ASX: GNC), based in Sydney, Australia, operates as a food ingredients and agribusiness company. The Company processes and distributes wheat, barley, and canola, as well as offers a range of malt products and service to brewers and distillers. GrainCorp also supplies and refines edible oils, serving customers worldwide.

Today, on 7 June 2019, the company announced to the market that it has executed a 10-year agreement with White Rock Insurance (SAC) Ltd to manage the risk associated with the volatility of eastern Australian winter grain production (the Contract).

White Rock Insurance is a subsidiary of UK-based Aon plc which offers a diverse suite of risk, retirement and health consulting solutions to clients worldwide.

As previously announced on 4 April 2019, the Contract is significant and will support in smoothening GrainCorp’s cash flow and earnings across the strained east coast Australia grain harvests. The Contract will be effective from 2019-20 FY onward. During the term, a fixed payment of AU$15 per tonne (Production Payment) will be made for each tonne of actual east coast of Australia winter crop production in any given year which is:

The total pre-tax annual cost of the Contract to GrainCorp is expected to be less than AU$ 10 million (including associated financing costs), excluding the Production Payments.

Recently on 10 May 2019, GrainCorp updated the stakeholders about the proposed sale of its Australian Bulk Liquid Terminals business to ANZ Terminals, subject to a condition that GrainCorp did not enter into a change of control transaction or other material alternative transaction before 10 May 2019. GrainCorp confirmed that this condition had been satisfied as of the date.

On 4 March 2019, GrainCorp announced to have entered into an agreement to sell its Australian Bulk Liquid Terminals business to ANZ Terminals Pty Ltd for a total enterprise value of approximately AU$ 350 million (representing ~13.0 times EBITDA).

Under the business segment mentioned above, GrainCorp operates around 8 liquid terminals sites located in different parts of Australia. These sites have a total storage capacity of around 211,000 m3. The sites are specialised to store and handle bulk fuels and chemicals as well as liquid fats & oils for a diverse client base, including GrainCorp Oils. Under the terms of the deal, GrainCorp Oils and ANZ Terminals would also reach a long-term storage agreement.

Commenting on the development, GrainCorp Managing Director and CEO Mark Palmquist explained that the decision to divest the company’s assets to another skilled operator based on a long-term storage agreement, would allow the company to obtain continued access to the storage needed to support its oils business and thereby enhance shareholder value.

One of the current portfolio review considerations of the company includes sale of the Australian Bulk Liquid Terminals business.

The transaction is subject to a number of conditions including the one mentioned above: no significant opposing change, regulatory approvals, lessors’ consents and completion of arrangements.

The financial adviser for the transaction was Blackpeak Capital and Gilbert + Tobin acted as the legal advisers.

GrainCorp’s Half yearly results (for the six months to 31 March 2019), demonstrate a particularly challenging period in grains and oilseeds, including severe drought conditions in eastern Australia and disruptions in grain flows by grain trade conditions. The earnings loss due to ECA drought and grain trade conditions is explained in the figure below. 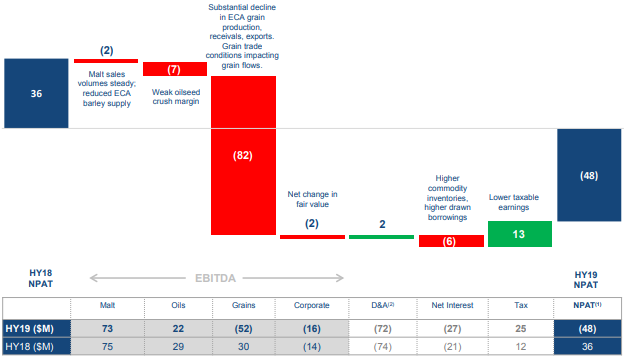 The business segment wise performance of the company is tabulated in the figure below: 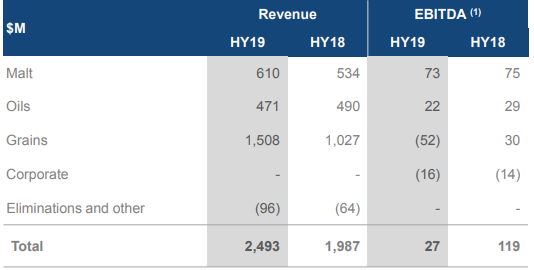 The net debt gearing was higher due to higher inventory levels and timing of commodity shipments (increase in receivables). Besides, the range of maturities on term debt from April 2022 to March 2023 had an average term debt of 3.7 years. It includes the refinancing of the 4-year, $ 500 million evergreen facility during the half-year.

In addition, the barley inventory facilities for Malt valued at ~$171 million were included in core debt. 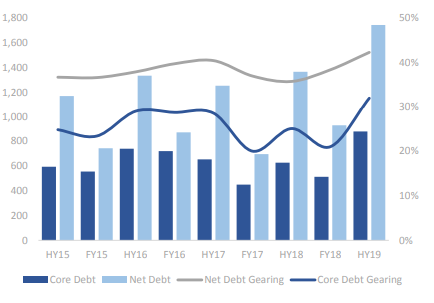 The company’s capital expenditure has continued to decline since peaking in FY16; in line with the completion of major capital works.

The demand for GrainCorp’s Malt products is estimated to be continually strong in the 2019 northern hemisphere summer. Besides, the company expect to obtain further benefits from the consistent improvements in Foods during the second half of the calendar year 2019.

However, challenging conditions may still prevail in eastern coast Australia (ECA) in 2HFY19 . While company is involved in planting for the winter grain crop, it is still too early in the season to forecast grain production levels.