Gold prices have been in a consistent rally post the outbreak of the coronavirus, which has prompted the global gold mining community to increase spending on the merger & acquisition activities. The M&A activities at the gold mining front have reached a record high, which as per the Refinitiv Eikon database, has reached to USD 30.5 billion with 348 M&A deals in 2019, which is above USD 5 billion from the previous peak of USD 25.5 billion seen in 2010.

The Definitive Agreement Between Equals

In exchange of the merged entity, AQG would receive 0.3246 shares of SSR Mining Inc for each share of AQG and the Exchange Ratio of 1 for 0.32546 coupled with the closing price for the common shares of SSR and Alacer on 8 May 2020 on the Toronto Stock Exchange (or TSX) implies consideration of CAD 8.19 per Alacer common share.

The deal represented a combined market capitalisation of $4.0 million, and at closing, shareholders of both SSR and Alacer would collectively own about 57 and 43 per cent of SSR shares, respectively.

Alacer suggested that the merger would create a diversified portfolio of high quality, long-life operating assets across four jurisdictions with a 3-year average annual production of nearly 780,000 ounces of gold at an all-in sustaining cost (or AISC) of $900 per ounce.

Also, the merger would combine the management and shared track records of both SSR and Alacer of creating value through exploration, construction, and operations and would bring together the expertise in different styles of mining, including open-pit, underground, pressure oxidation, and more.

Both SSR and the Company assess that the combined entity would generate an average annual pro forma free cash flow of approx. $450 million, which would be peer leading, as the estimate remains $175 higher against the peer group annual average of $275 million.

The merger is estimated by the Company to provide financial strength and organic growth potential to the combined entity with a strong balance sheet consisting of consolidated cash and marketable securities of nearly $700 million, which would support the growth pipeline and facilitate capital returns evaluation.

On the growth counter, the merged entity would get a presence in three significant district-scale land packages across the United States, Canada, and Turkey and would contain attractive growth portfolio of low capital intensity greenfield and brownfield opportunities.

The profit before income tax stood at $35,222, up by ~121.00 per cent against pcp; however, the Company gained an income tax benefit of $27,173 during the period, due to which the net profit after tax or NPAT of the period soared by ~869.0 per cent, leading to a substantial gain in basic earnings per share of nearly 1,500 per cent at $0.16 per share for the period.

The Market Action and Sentiments

The market seems to be liking the development of the Company for quite some time with despite a correction in gold, the stock rising to a new eight-year high of $9.03 (intraday high on 8 May 2020). However, post the announcement, the stock has reacted negatively with prices retracing back from the level of $9.03 to the present level of $8.52 (as on 12 May 2020, 2:40 PM AEST), down by 4.05 per cent against its previous close on ASX on 8 May 2020.

Also Read: Gold- Is a Reversal on the Cards as Central Banks Go Slow on Buying? 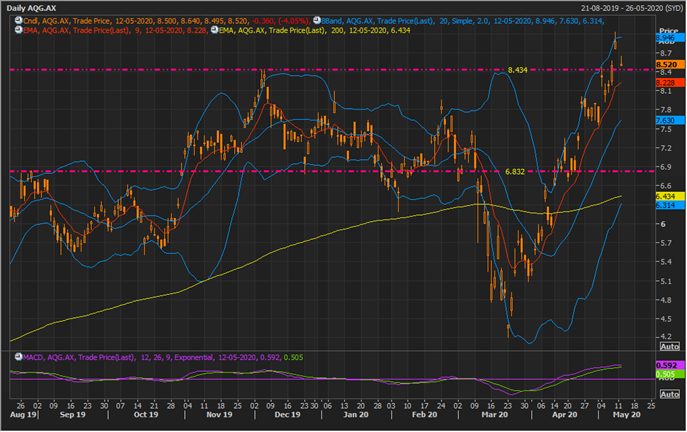 On following the daily chart of the stock, it could be seen that the stock is trading in the upper range or +1 standard deviation (or S.D) of the 20-day Bollinger band and is also currently above the 200-day exponential moving average, reflecting that current sentiments around the stock are bullish.

The 12,26,9 Moving Average Convergence and Divergence or MACD indicator is giving a positive signal, while the 9-day exponential moving average is showing a positive crossover with the 20-day simple moving average (which is the mean value line or the middle line of the Bollinger band).

Also, it should be noticed that the stock has just breached its medium-term resistance level of $8.434, which should now act as the primary support for the stock followed by the 9-day EMA, mean value of the Bollinger, the level of $6.832, 200-EMA, and at last the bottom line or -1 S.D of the Bollinger.