To date, Azumah has estimated a JORC 2012 mineral resource of 2.5Moz of gold with 1.0Moz Ore Reserve (January 2019 report), excluding below-pit mineralisation at the Wa Gold project. These resources include 1.6Moz of Measured and Indicated Category resources, all evenly distributed between Wa East camps and the Kunche-Bepkong.

The three flagship discoveries of the company include Kunche, Bepkong and Julie deposits, which are together estimated to return a gold recovery of ~92% as confirmed by extensive metallurgical test work. Azumah has also discovered and delineated a wide range of satellite deposits including Kunche Northwest, Julie West, Aduane and Danyawu among others. 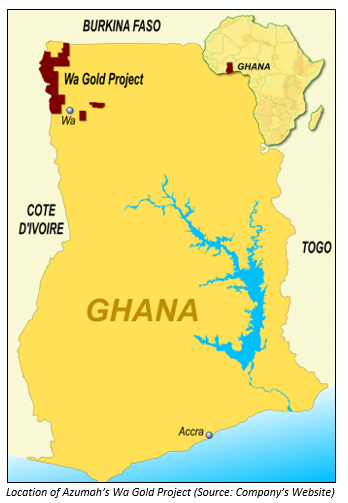 The lease-holding portfolio of the company outlines two 15-year Mining Leases over its principal deposits and 2,400km2 of exploration licence holdings. Most of its tenure covers prospective host rocks (Birimian terrain) to a majority of world-class gold miners in West Africa.

Looking forward, the company eyes a substantial growth in its Mineral Resources as it continues to discover and explore its targets’ pipeline. The latest depth extension at Kunche follows the recent discovery at the nearby Bepkong deposit, which includes the high-grade mineralisation to 580 metres below the surface.

Azumah Managing Director, Stephen Stone, stated that the first phase of deep, widely spaced exploratory drilling has returned some exceptionally high-grade intercepts of up to 5oz per tonne. He added that the company possess the likely potential to increase its current 2.5 million ounces resources with further exploration in the vicinity of existing deposits.

The confirmation of deep mineralisation at Kunche has raised the company’s expectation to identify multiple, mineralised ore shoots from infill drilling associated with feeder zones extending below the planned Kunche open pit mine. Azumah further stated that the discovery of gold at these depths provides notable geological information for the next stage of drilling. 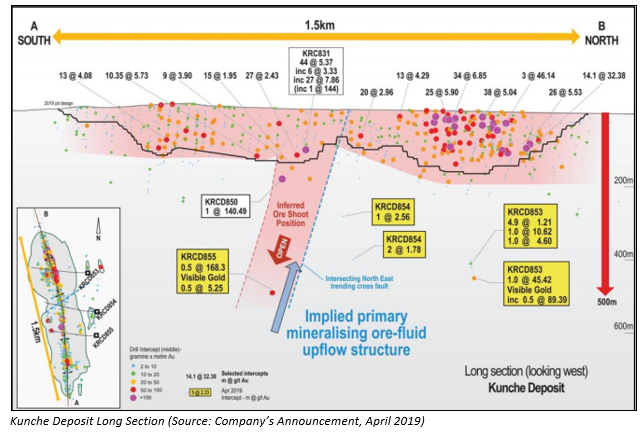 In the next phase of drilling, Azumah aims to infill back up towards the surface as well as to greater depths in West Africa, Western Australia, Canada, and elsewhere in the world. Azumah’s calendar further marks a feasibility study scheduled for finalisation in the third quarter of 2019, in order to arrive at a development decision thereafter.

Azumah started exploration on the Wa Gold Project back in 2006, which led to the discovery of significant gold mineralisation at Julie and Kunche-Bepkong. The integration of geochemistry, shallow percussion drilling, soil surveys and geological mapping provides valuable geological information for prospect evaluation and targeting.

Moreover, the company’s entire interests in the Ghana region is held through its subsidiary, Azumah Resources Ghana Limited (AZG). In 2017, Azumah executed an agreement with Ibaera Capital GP Limited whereby Ibaera has a right to earn partial interest (42.5%) in its subsidiary by spending US$11.5 million over two-year.