Galilee Energy Limited (ASX: GLL) forms a part of the energy sector. It is involved in the business of exploration of oil and gas. GLL is currently focused on the progress of its strategically situated Glenaras Gas Project in the Western Queenslandâs Galilee Basin.

The company today, on 27th May 2019, provided an update on the drilling operations at its wholly owned and operated Glenaras multi-lateral pilot programme, located in the Galilee Basin. 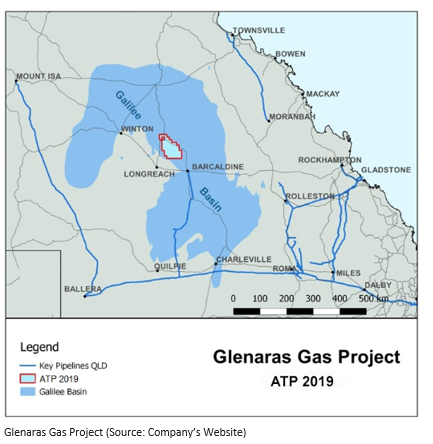 The company reported that the lateral section of Glenaras 16L was successfully drilled, having approximately 308 metres of net coal intersected in the well through the R3 seam primary target. The work will be suspended pending the completion work with an electric submersible pump that is scheduled to start during mid-June.

GLLâs Managing Director, Peter Lansom, stated that the company was successful in executing the three well programme safely, on schedule and within budget. The Board is proud of the way the technical team has worked to learn from the difficulties occurred in the last drilling campaign, and the subsequent modifications have resulted in a successful campaign, which has significantly made the project risk free.

The companyâs well-designed shielded five-well lateral pilot in excellent coal provided the platform for GLL in drawing down a large area of coal below critical desorption pressure, which is expected to progress to material gas rates.

Galilee Energy has commenced working on the gas and water pipeline installation, and a workover rig has been secured by the company to start in mid-June with an expected two-week duration. The company aims to begin production in the new lateral wells by early July 2019, after the required completion and tie-in operations. The budgeted cost of the three-well lateral programme will be around $8 million as expected by the company. The costs will include drilling, completion and tie-in.

The company will provide further updates on the operations to the market throughout the tie-in and completion programme. A shielding to the central well will be provided by the configuration of the well from the large area, which the previous two lateral wells were draining once the pilot is fully operational. The company expects that the drawdown of production will be required for three months to observe the material gas production rates.

The company in the recent past has reported that it has completed the drilling successfully in the lateral section of Glenaras 15L, with approximately 295 metres of net coal intersected in the well through the R3 seam primary target.