Australia-based Galan Lithium (ASX: GLN) has had the most busy and dynamic month of July 2019 as the exploration company aggressively progresses towards unlocking the potential at its Hombre Muerto Lithium Brine Project in Argentina located within South America’s highly proliferous lithium triangle. Of late, consistent milestones have been achieved by the company with respect to its endeavours at Hombre Muerto, demonstrating perseverance as an aspiring lithium miner. 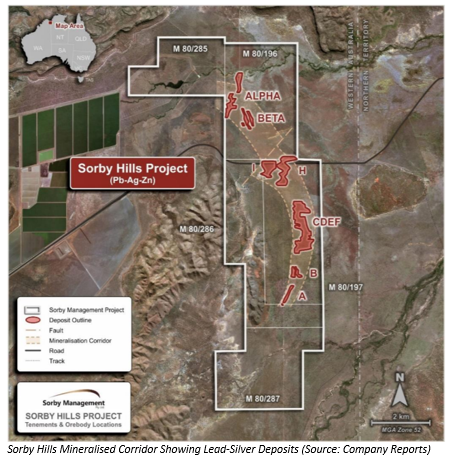 On 24 July 2019, Galan updated the stakeholders that it had received the much-awaited permits from the Secretaria de Estado de Minería - Gobierno de Catamarca (the authority that approves drilling permits in Catamarca, Argentina) to conduct a maiden drill programme over its Western Basin Projects located on the Hombre Muerto Salar. The permits have been granted to undertake drilling on a total of 14 drillholes plus five (5) water bores within 18 months.

Following this development, the company has already launched preparatory works to enable access for drilling, which will commence shortly. Initially, the exploratory drilling is planned to target the Pata Pila and Rana del Sal Project areas. Within these targets, the drilling will primarily analyse the highly conductive anomalies  recorded  from  the previously completed first ever CSAMT (Controlled Source Audio-frequency Magnetotellurics) surveys over the project areas, in late September 2018.

The Western Basin encompasses three other prospective project areas namely El Deceo, Santa Barbara and Catalina. All the five tenements (including Pata Pila and Rana del Sal) straddle the border between Catamarca and Salta provinces in Argentina on the periphery of the main Salar de Hombre Muerto. 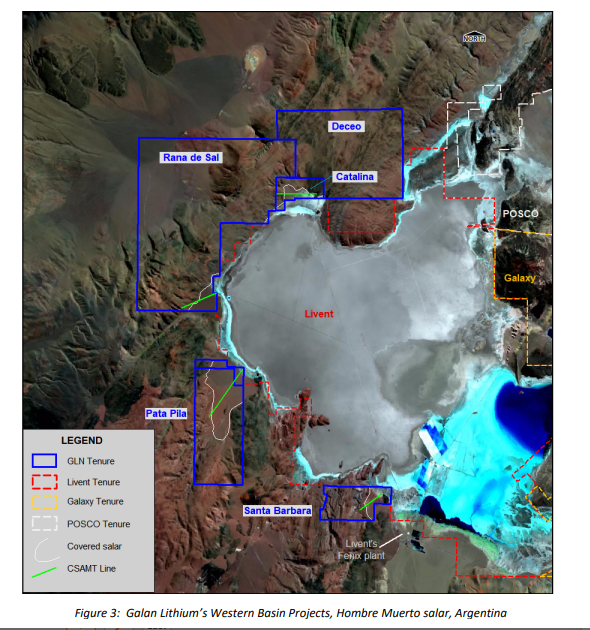 Along the western margin of the Salar, Pata Pila covers a large alluvial fan with the geophysical profile  showing  an  upper,  horizontal  conductive  layer  over  ~2 km  being  compatible  with  geological  units  read  to  contain  brines  (see Figure below ).

The Rana de Sal profile covers an alluvial fan area interpreted to overlie the Salar.  The geophysical profile of the prospect demonstrates a highly conductive response over ~1.5 km that are compatible with units interpreted to contain brines (see figure below).

The readers of our report are also aware that Galan Lithium has recently closed its initial resource drilling phase over the Candelas Project located in the south-east region at Hombre Muerto.

Overview of Drilling at Candelas

The Candelas Lithium Brine Project, located in the Catamarca Province in the Northern part of Argentina on the Salar De Hombre Muerto, underwent an extensive maiden diamond drilling programme that comprised of two stages.

More on Stage I drilling can be READ here.

Interestingly, the Stage II data confirmed a minimum 3.5-km strike extent of heavy brines at the northern portion of Candelas, where the drillholes one, three, five and six all demonstrated potential lithium grades > 500 mg/l Li ranging from 510 – 802 mg/l Li.

With a fuller picture of the Candelas Project in place and adequate information, the company is now on track to deliver a JORC complaint Maiden Resource Estimate for the same by Q3 CY2019.

In addition, pumping tests continue to be carried out at the remaining holes at Candelas to ensure quality control over  previous  samples. The company is simultaneously preparing for a Pre-Feasibility Study into the potential  development  of  the  project, that would begin immediately post the resource definition.

Moreover, a preliminary investigation into ion exchange technologies is also  underway (as announced July 2019) for processing lithium brines from the project. The results of the same would be utilised into the PFS. More on the same can be READ here.

Lithium -ion batteries (LIBs) find a wide application in millions of rechargeable consumer electronic devices as well as electric vehicles (EVs), that are on the edge of large-scale global commercialisation as the clean energy rationale penetrates deeper into the society and global giants like Tesla, Nissan, General Motors, Ford, and Toyota continue to promote the manufacturing and adoption of EVs.

With that backdrop, it is no wonder that numerous exploration companies are turning towards the vast Lithium Triangle covering Argentina, Chile and Bolivia to capitalise on the amazing opportunity and the knowledge that the global Lithium demand is expected to witness an upsurge in the next couple of years.