Independent Non-Executive Director- On 4 September 2019, Galan Lithium announced to have appointed Mr. Daniel Jiménez Schuster as an Independent Non-Executive Director to the Board of the company. Mr Daniel is a civil industrial engineer who brings a wealth of experience to Galan Lithium with his most recent engagement been with Santiago, Chile-based global leader in the lithium industry, Sociedad Química y Minera de Chile (NYSE: SQM, Santiago Stock Exchange: SQM-A, SQM-B), for 28 years.

At SQM, Mr Daniel was serving as the Vice President of Sales of Lithium, Iodine and Industrial Chemicals. During his tenure, he conceptualised and developed the commercial and marketing strategy for SQM’s industrial products and was credited for over USD 900 million worth of estimated sales in 2018. Mr Daniel joined SQM in 1991 and has held several senior positions across the finance and sales departments at SQM´s headquarters in Chile as well as in the United States. He had also handled regional commercial responsibilities for Europe, Africa and Asia based in Belgium.

Daniel resigned from his duties at SQM in late 2018 and continued being a leading independent consultant to the lithium industry focusing on areas like market intelligence, forecasting and lithium business strategy.

Galan Lithium added that the remuneration for Mr. Daniel Jiménez Schuster would be in line with the current non-executive directors and he will also be issued, pending shareholder approval, around 2 million company options (exercisable at $ 0.25 each with a term period of two years).

The company is thrilled to have Mr Daniel on board as experienced professionals, particularly in the South American lithium industry, are not easy to find. According to Galan Lithium’s Chairman, Nathan McMahon, Mr Daniel’s appointment is a further testament to the calibre of the company’s ongoing projects and the quality of work that it has delivered to date.

He also added that Daniel’s prior experience would be of great assistance at a crucial time when the company is advancing development of its 100%-owned Candelas Lithium Brine Project with imminent announcement of the mineral resource estimate, the Pre-Feasibility Study (PFS) slated for commencement during the fourth quarter 2019 (Q4 2019) and as the company eventually transitions from explorer to developer.

Earlier in mid-August 2019, Galan Lithium had appointed Mr Boris Caro as the Study Advisor for Candelas Lithium Brine Project’s PFS, scheduled to be taken up in Q4 2019. A mining engineer by profession, Mr Caro also has an extensive 20 years’ experience acquired from working in the global mineral industry, including Australia. Most recently, Mr Boris, as the Study/Project Manager, led the Feasibility Study, front-end engineering, environmental approvals and construction-related activities during May 2017 to April 2019 for Orocobre Ltd’s Olaroz Expansion Lithium Project in Argentina.

Galan Lithium, with a strong team in place, is looking forward to optimally leverage Mr Boris’  expertise in formulating the strategy and study development activities of the Candelas PFS.

Within the Hombre Muerto basin, Galan Lithium holds 100% earning rights in 13 granted exploration tenements which broadly constitute six project areas spanning 25,000 ha, of at least 7,800 ha is termed prospective for brines, including a major 6,000 ha under the Candelas Lithium Brine project, which includes a ~15 km long by 3-5 km wide channel located in the Catamarca Province, Argentina.

Since the receipt of permits from the Secretaria de Estado de Mineria – Gobierno de Catamarca in December 2018, Galan Lithium has rapidly completed the two-staged (Stage I and Stage II) maiden drilling campaign comprising eight drillholes at the Candelas Project. The assay results from all the drillholes confirmed the presence of high-quality lithium brines. 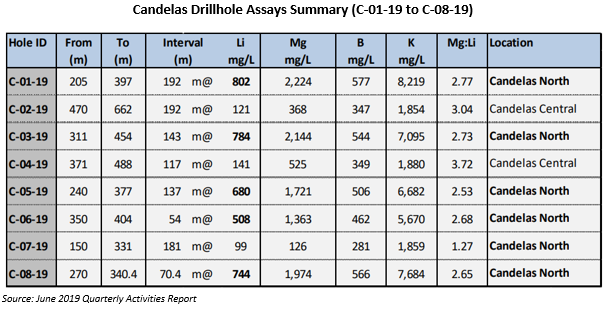 Currently, the company is carrying out pumping tests at all the drillholes to ensure quality control over previous samples. In parallel, Galan is also carrying out a preliminary investigation into ion exchange technologies for processing lithium brines extracted from the drilling at Candelas Basin.

Galan lithium is presently expediting the Maiden Resource Estimation (JORC compliant) for the Candelas project in this quarter, following which the PFS would be taken up.

On 24 July 2019, Galan Lithium announced to have received permits for a maiden drilling program, which commenced mid-August 2019, at its 100%-owned Western Basin tenements comprising Santa Barbara, Catalina, Rana del Sa, El Deceo and Pata Pila, located on the periphery of Salar De Hombre Muerto. The initial approval has been granted for 14 drillholes and 5 water bores, targeted to be completed in 18 months from the start. 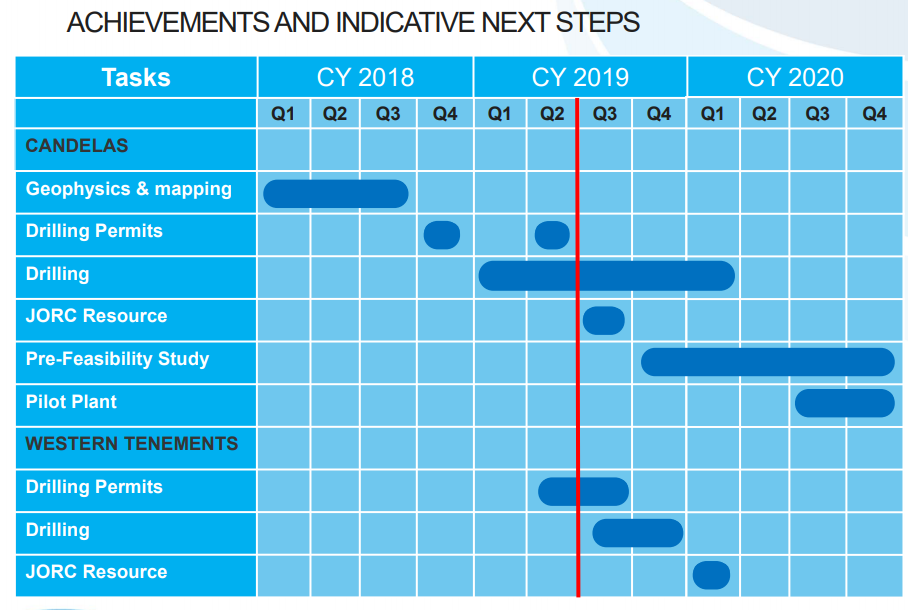