Many ASX gold mining companies such as Newcrest Mining Limited (ASX:NCM), West African Resources (ASX:WAF), Evolution Mining Limited (ASX:EVN), Gold Road Resources Limited (ASX:GOR), and many more have closely tracked the movement in gold prices, and some have even outperformed gold and S&P/ASX All Ordinaries Gold Index in the short- and long-run. 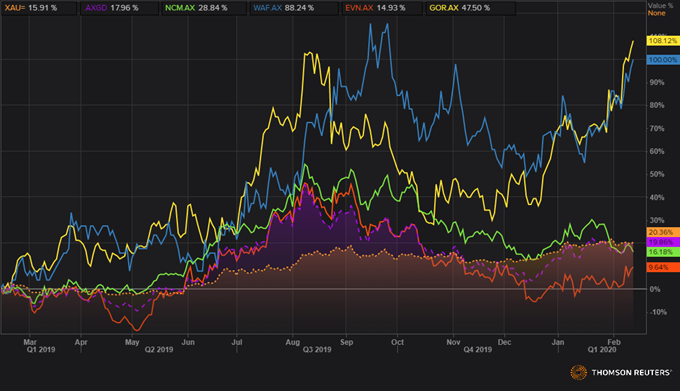 The rally in gold prices has prompted many ASX gold mining companies to develop assets, seize opportunities proactively in terms of acquisitions, and build decent balance sheets, with a foremost target to increase shareholders wealth and stakeholders engagement.

Newcrest remained one such company, which seized the opportunity emerged in the name of Red Chris gold mine, which provided NCM additional resource and reserve base.

NCM announced its half-year results for the financial year 2020 and reported a 3 per cent increase in total revenue, which stood at USD 1,790 million for the six-month ended on 31 December 2019 (1HY FY20), in which gold revenue accounted for ~ 83.63 per cent in the total revenue.

NCM reported a Statutory Profit of USD 236 million for the period, including significant items of USD 44 million, representing proceeds from the write-down of Gosowong following its classification as ‘held for sale’.

The Underlying profit stood at USD 280 million, which remained ~ 15.35 per cent higher against the previous corresponding period (pcp) amid a higher realised average price on gold sales, favourable impact on operating costs for the Australian operations from the weakening of the Australian dollar against the US dollar, and a lower depreciation expense.

However, the impact of these factors was mainly offset by lower production at all sites (except Red Chris), and a lower realised copper price. The higher profitability increased the income tax expense, which resulted in an increase in corporate costs and exploration expenditure.

The total cost of sales for the period surged by 2 per cent against pcp to stand at USD 1,242 million; the components of the revenue and cost of sales is as below:

The free cash flow for the period stood at -USD 729 million post adjusting for the outflow of USD 774 million in relation to the acquisition of 70 per cent stake at the Red Chris gold prospect, and an investment (cash outflow) of USD 61 million in Lundin Gold to increase the ownership from 27.1 per cent to 32 per cent.

At the end of the period, Newcrest held cash of USD 691 million, down by 33 per cent against pcp.

The gold production fell by 12 per cent against pcp to stand at 1,062,751 ounces of gold (~1.1 million ounces); however, an 18 per cent increase in average realised price provided a cushion to the revenue. NCM realised an average price of USD 1,446 during the period, while the exchange rate plunged by 6 per cent (positive for revenue).

The all-in sustaining cost (which considers exploration expenditure as well) surged by 18 per cent against pcp to stand at USD 880 per ounce.

While NCM focuses on Red Chris now, another gold mining company on ASX- West African Resources Limited (ASX:WAF) is developing its cornerstone asset in Burkina Faso, Africa. The rally in gold prices might or might not be deriving the company to fast track the development of its Sanbrado Gold Project, but ultimately this is happening, and WAF is ahead of schedule concerning development process and expects an early production.

The emerging new gold producer, WAF announced that it has completed commissioning of the primary crusher ahead of schedule at its Sanbrado Gold Project.

WAF aims to produce over 300,000 ounces of gold during the first 12 months of the production, which is now expected in early Q2 of the year 2020 while keeping the all-in sustaining cost below USD 500 per ounce.

WAF successfully commissioned the primary crushing circuit, and the first ore from M5 open pit was processed and conveyed to the coarse ore stockpile.

The project is now 90 per cent completed with only minor piping and instrumentation work remaining, and the company expects the mechanical and electrical work to complete in late Q1 2020 across all plant and equipment.

WAF also anticipates the first power from the Heavy Fuel Oil medium speed generators to be online in March 2020, while the introduction of ore downstream of crushing, including water and reagents, is set to begin by late Q1 2020 which should result in first gold by early Q2 2020.

On the mining front, the opening-pit mining contractor of the company- African Mining Services, a subsidiary of ASX-listed Perenti Group (ASX:PRN) is ramping up activities across both the M5 and M1 open-pit prospect; and, so far, more than 200,000 tonnes of oxide ore has been delivered for the Run of Mine pad with an average grade of 1.4 gram per tonne of gold. 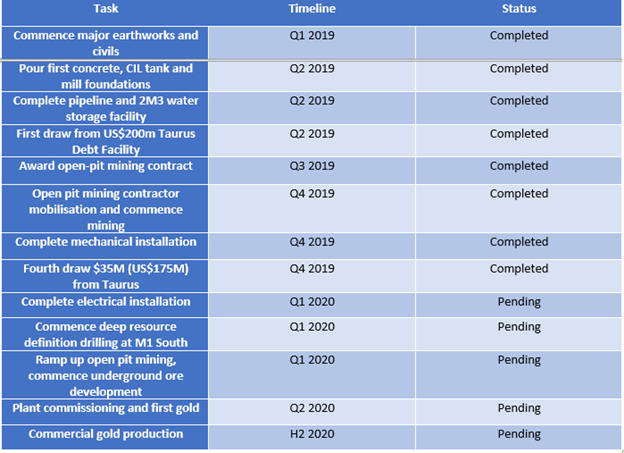 The stock of the company last traded at $0.525, up by 5 per cent against its previous close on ASX.