Flamingo Ai Limited (ASX: FGO) is an Enterprise SaaS company. It provides Intelligent Assistants, FAQ & Knowledge Retrieval Assistants along with Data Science as a Service business analytics. It was established in 2014 and is based in Sydney, Australia. It has an office in Hartford, USA as well. It provides a cognitive virtual assistant, artificial intelligence platform to serve the purpose of sales of financial products online. It aims to increase sales conversion, scale customer service efficiently and improve customer and employee experience.

On 16th May 2019, the company announced that it has received an amount of $1,128,032 from the Australian Governmentâs Research and Development Tax Incentive Program. This was a result of the research and development activities conducted by the company in the calendar year ending 31st December 2018. Post the receipt of this incentive, the companyâs cash and cash equivalents total up to $5.4 million.

The proceeds generated from this incentive would be used in research and development of the companyâs Cognitive Virtual Assistants, Journey Assist Platform and its Unsupervised Machine Learning Algorithms.

The company provided its Quarterly Update and Cash Flow statement for the quarter ending 31st March 2019. By the end of the quarter period, it signed a new six-month engagement with Nationwide in the US, to begin in April 2019. Also, it was the single largest contract which FGO has signed during the quarter. The contract depicts the healthy relationship between FGO and Nationwide. The company would use its core technology to deploy a proprietary Life & Annuities machine learning based âBrainâ along with other Flamingo Ai solutions.

Further, the company was in discussions with its key customers for the MRR contract. The company is focussed on directly selling and delivering its products and services, (especially Intelligent Assistants for FAQâs and Knowledge Retrieval and Data Science as a Service) over the next six months to a small number of qualified key prospects. It would primarily target the financial services sector, with an objective to lay down the value of its technology to the customer. This would be a successful event for the companyâs channel partners.

During the quarter, FGO attained renewal of its PCI Compliance. It also successfully completed and began several security reviews with existing and prospective customers.

On the management front, the company appointed Mr Olivier Cauderlier as Chief Operating Officer in April 2019. Besides, on 29th April 2019, Chief Technology Officer, Mr Tony Coorey resigned from the Company with effect from 29th May 2019. Earlier in February 2019, Chief Commercialisation Officer and Executive Director, Mr Mark Kehoe had resigned from his designation and is scheduled to leave in May 2019. Mr Bob Hilborn was appointed as Vice President and Head of US Operations, effective 1st March 2019.

The table below depicts the cash receipts and revenue of the company: 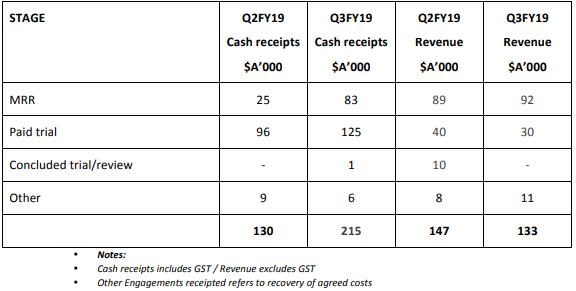