The commitment from Cisco to jointly expand and upgrade FirstWave’s Cybersecurity Technology Laboratory is further evidence of the strength and development of the partnership. The expansion of the technology laboratory is an outcome of growing global threats that afflicts corporations across the world.

As per the prediction of Cybersecurity Ventures, by 2021, damage via cybercrime would be hitting $6 trillion yearly.

Mr Simon Ryan, the Chief Technology Officer of FirstWave, stated that the significant expansion of Sydney laboratory facilities is done, with a view to build an additional staging and testing environment, which will significantly reduce and enhance the speed of the company to market with new product innovations. He also stated that the agreement with Cisco to fund the additional infrastructure and software proves a real commitment towards their partnership.

Further, the company mentioned that Cisco is investing more than A$1 million in the project through the supply of all the equipment, as well as supporting software that is necessary to stand up the expanded capability.

Recently, on 23 May 2019, the company had announced that Cisco had confirmed the addition of its first client, Tier One Service Provider in APAC under the OEM Agreement. This was another landmark in the company’s relationship with Cisco. It also supports the company’s partner “sell-through strategy” and confirms:

Out of the several wins, this was the first one which would contribute significantly to the APAC target of the annual revenue of $20 million over the next 3 years. 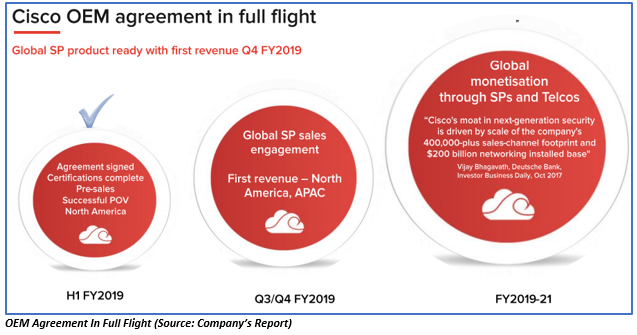 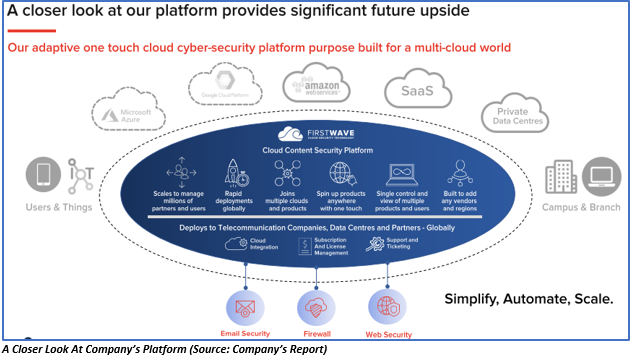 In the Q3 FY2019 period which ended on 31 March 2019, FCT signed NTT Data UK as new systems integrator partner post the successful proof of value which opens a new path for the company to the global market focusing on EMEA region. After the signing of a reseller agreement with SHELT for the Middle East and African markets, the company completed two proof of value and revenue to be realized in the fourth quarter of FY2019 from the SHELT reseller agreement. Further, FCT, during the third quarter of FY2019, re-signed the Telstra product services agreement. The company, during the period, had launched the next generation public cloud platform on AWS (Amazon Web Services) in London for its EMEA expansion. FirstWave also raised $6.5 million capital in March 2019.

The outlook of the company in the fourth quarter of FY2019 is as follows: