Esports Mogul Asia Pacific Limited (ASX: ESH) is an ASX listed esports business which brings together players, game developers as well as the tournament organizers to an innovative world of competitive online gaming. 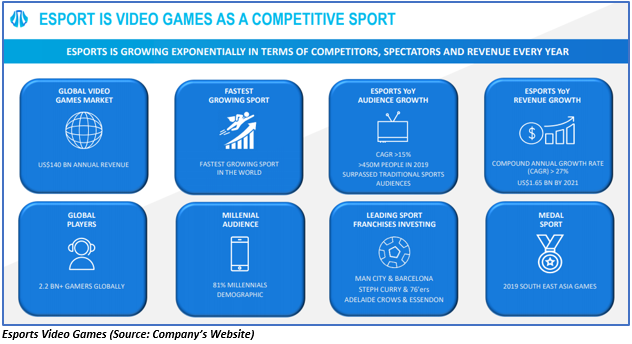 On 27 May 2019, Esports Mogul notified the market about Mr Mark Warburton taking charge, as the company’s (CMO) Chief Marketing Officer. Mr Warburton has 20 years’ experience in the video games and esports industries. He also has a background in leading marketing, business development along with the sales teams for global corporations.

Mr Warburton will be responsible for developing and executing the global marketing strategy. He would also be looking for the market entry for maximizing the global expansion plans of the company, as well as extend on newly developed commercialization strategies which include a recent industry-first deal with Alliance. Further, he would also be driving partner development globally and will be collaborating with esports teams, leagues, grassroots organizations, influencers, consumer brands as well as game creators. These responsibilities are important in improving user acquisition as the Company continues to significantly drive revenue for Mogul internationally.

Recently, on 20 May 2019, the company had received binding commitments to raise A$3.1 million in an oversubscribed placement of 310,000,000 fully paid ordinary shares at A$1.0 cps to sophisticated and institutional investors. The subscribers would be receiving one free-attaching option for every two Placement Shares subscribed. The option will be exercised at A$0.02 per option on or before the date, which will be 24 months from the date of issue.

The capital raised through this transaction will be used for supporting the rollout of the industry first deal with Alliance, (previously announced on ASX) followed by an expedition of the revenue-generating activities, international expansion along with the continued innovation of market-leading tournament platform of the company.

On 24 May 2019, the company notified the market that it had issued the above-mentioned 310,000,000 fully paid ordinary shares. Further, on 27 May 2019, the company made disclosures regarding the previously mentioned Placement, in line with Australian Securities Exchange’s Listing Rules 7.1A.4(b) and 3.10.5A.

The dilutive effect of the Placement on existing shareholders is as follows:

Recently, Mogul had entered into an industry-first deal with Alliance, one of the most recognizable esports brands of the world. Under this deal, the company would be providing Alliance with its esports tournament platform. It will also be assisting Alliance in starting a yearly large-scale event series. This event series will be supporting amateur along with the semi-pro players across Europe. Thus, the company would be able to spread its reach across worldwide esports ecosystem.

During the Q1 FY2019 which ended on 31 March 2019, the company added PC, console and mobile game titles to their game catalogue. In Southeast Asia, the Silver Slam was completed successfully, and around 1,500 tournaments were offered to the players. Mogul was able to reach 1mn registered users during the period. The company also launched the Mogul Wallet for supporting the commercialization initiatives along with the paid entry tournaments. The company also announced the appointment of Jamie Skella as the Chief Strategy and Commercial Officer.

There was a net cash outflow of A$1.241 million from the operating activities and A$0.138 million through investing activities. By the end of the Q1 FY2019 period, Esports Mogul had net cash and cash equivalent worth A$1.016 million. The estimated cash outflow for the Q2 FY2019 is A$0.700 million. 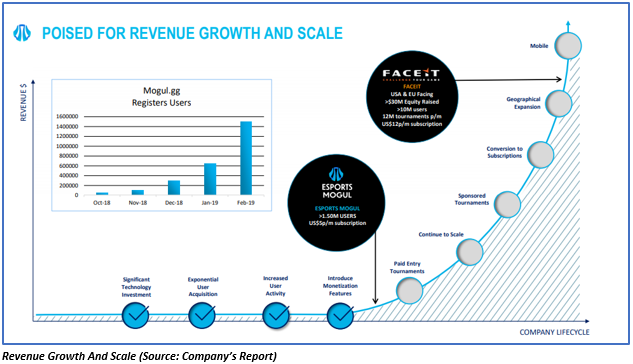