The company announced that it has recently opted to extend the maturity date of its existing loan facility for three months, which will provide Eon more time to further evaluate its PRB prospects and the Govt Kaehne 9-29 well. Since 2014, the company has had loan arrangements with ANB Bank and till now, the company has repaid US$3.93 million to the Bank, taking the current loan balance to US$6.159 million.

The company has further informed that it has chosen Capstar as the drilling rig contractor of choice for Govt Kaehne 9-29 well.

As offset wells have good initial production rates (IP’s) and estimated ultimate recovery (EUR), Eon has confidence in the Govt Kaehne #9-29 well. The well is located in a structurally high position in an oil-rich reservoir with 30-40 of pay expected in the Dakota Formation and moreover, the well is in close proximity to service town, which allows it to have good access for transportation of the oil from storage.

It is expected that the well will penetrate a secondary target formation (the Muddy Formation) at a depth of around 6,000’ and once that target depth is reached, drill stem testing and open hole logging will be performed to evaluate the reservoir and deliverability of the well. 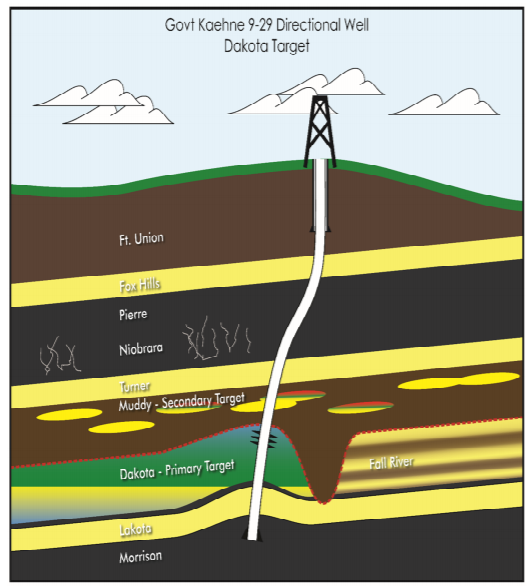 PRB is an attractive region for future development due to the presence of multi-stacked hydrocarbon formations in that region, making PRB project and the Govt Kaehne #9-29 strategically important for the company.

Along with PRB, Eon’s oil and gas division also owns and operates various other producing oil and gas fields in the onshore USA, which includes Borie Oilfield, Silvertip Field and Sheep Springs and Round Mountain Oilfields.

In April 2019, the company deployed a workover rig to the field to return some wells to their full production, as a consequence of which, the production from the field increased to over 60 BOPD (barrels of oil equivalent per day) which is higher than Q4’18 average daily production rate. Propane usage for heating of tanks and pipes has been minimised, which has improved the economics of the field through lower operating costs.

In the March quarterly report, the company advised that the oil produced from the Sheep Springs Field continues to attract a price premium with the average oil price for Q1-19 being $64/Bbl compared to the average West Texas Intermediate (WTI) price of $54/Bbl.

In order to capitalise the opportunity of increasing battery mineral demand, EON has established a Battery Minerals division.

In February and March 2018, the company acquired 42 lode claims, covering an area of 840 acres in the Stillwater Range, Nevada. These claims include the historic Gilberts Mine and various old adits and tunnels from previous mineral exploration. The company believes that these load claims have exploration potential for a range of battery minerals, including cobalt and copper. The company further stated that it will continue with the low cost exploration activities on its Nevada prospects.

Appointment of Simon Adams: The company recently appointed highly experienced Simon Adams as an Executive Director of the company. In his 25 plus years of experience, he held various executive roles with several public and private companies. The strong strategy and governance skills of Simon Adams and his extensive finance and corporate experience have strengthened the company’s Board.

Simon is based out of the company’s Perth office in Western Australia and was appointed as the Chief Financial Officer (CFO) in the year 2013. Due to his strong strategy and governance skills, the Board was delighted with Simon’s appointment as a Director.

Appointment of Mr Matthew McCann: In May 2019, the company appointed Mr Matthew McCann as the new Chairman of the Board, replacing Mr Stowell, founder of Eon, from his position as Chairman. Mr McCann has been a member of the Board since 2014, and has an extensive network within the US energy sector.

It is expected that the extensive network of Mr Matthew McCann and his corporate experience and deep knowledge of the US oil and gas industry will drive the company towards the development of its Powder River Basin and other future assets.

While stepping into the shoes of Mr Stowell, Mr Matthew McCann told that his priority will be to work with the Board and its management team to deliver value for the company’s shareholders. Mr Matthew is bringing a substantial knowledge and experience in the US capital markets, acquisitions and corporate strategy and has a strong track record of building shareholder value.