Price declines are becoming the common rhetoric across the Australian property market. Property price falls were limited to Sydney and Melbourne during the initial phase of the price fall cycle. However, slowdown in price growth is now visible across other regions, pointing to weakening market conditions across the country.

The latest data from CoreLogic suggests that property values have been declining, with every capital city well past its peak rate of growth. The property consultant has recently released its property values data for June, reflecting downward momentum building in the housing market.

This comes soon after the Reserve Bank of Australia (RBA) embraced two back-to-back interest rate hikes in May and June, taking the official cash rate to 0.85%. Another interest rate hike is widely expected in the June meeting due next week.

Over the recent months, the property market has been influenced by a host of factors, including the fear of future interest rate hikes, which has added uncertainty to the space. These factors have fuelled projections about property price slowdowns becoming more apparent in the coming months.

Where are Australian property prices headed?

The national Home Value Index (HVI) reported by CoreLogic suggests that property values have declined for the second consecutive month in June. The index fell by 0.6% in June alone, with continued price falls across Sydney and Melbourne.

Here is a snapshot of the change in dwelling values visible across capital cities: 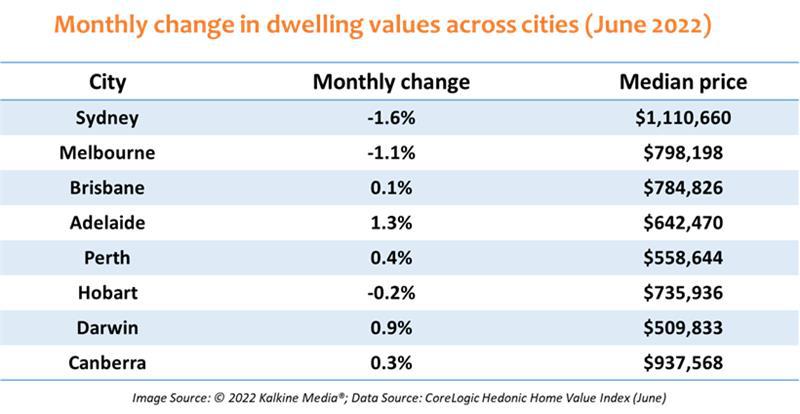 Housing values reached a peak in March this year, with a gradual decline becoming more and more apparent with each passing month. The price falls are expected to become sharper as the intensity of the interest rate tightening cycle strengthens. This means that if the RBA takes a more aggressive approach to monetary policy tightening in the coming months, then prices could fall at an even higher rate.

Rising fixed-term mortgages and tighter lending conditions were some of the early drivers of the property market slowdown, followed by a rise in variable rate mortgages. Commercial banks have passed on the burden of increasing cash rates to consumers by introducing higher rates on loans. Additionally, as fiscal support came to an end and consumer confidence started to topple, housing prices declined further.

The situation has been further exacerbated by inflationary fears and affordability concerns. Rising prices of goods and services have weakened consumer confidence. Moreover, a drop in the number of mortgages being taken is also visible. Thus, concerns loom that future interest rate hikes could make the housing price fall even more widespread.

Despite these challenges, unit prices have bucked the trend and remained relatively stable. This again highlights the fast-paced growth of house prices across the country during the pandemic era. Individual houses have been in high demand since the lockdown period and have consistently outperformed units in terms of price growth.

Should buyers wait for a better deal?

Falling prices are often a signal for buyers to wait out the decline and lock a better deal. However, the Australian property market looks highly volatile, and buyers need to act cautiously. Waiting out the current decline could be a possible way to save money. But waiting too long could end up thinning the chances of securing lower-priced homes.

It is also important to view the seller’s side in this scenario. Buyers are moving away from the market, driven by the fear of overpaying or FOOP. This has prompted most sellers to take their properties off the market in search of a better price. Thus, falling prices are being accompanied by a removal of premium, good-quality houses from the market.

If buyers decide to wait out the current price decline, they could see fewer houses being put up for sale. Sellers are likely to only step into the market if they have a highly compelling reason, such as an urgent need for money.

As the housing correction begins to emerge, a drastic change awaits both buyers and sellers. Some reports suggest that the fear of missing out (FOMO) has now transferred to sellers, who want to make the best out of the current situation. Where the housing market ultimately lands largely depends on the RBA’s interest rate cycle.