It was perhaps expected that the cash rate would remain unchanged given the Reserve Bank’s intentions to remain in positive interest rate world. The Reserve Bank of Australia (RBA) said it will again start buying 3-year bonds in secondary market since yield is breaching 0.25% target. After the announcement, the yield on the 3-year bonds fell on Tuesday, closing at 0.269%. 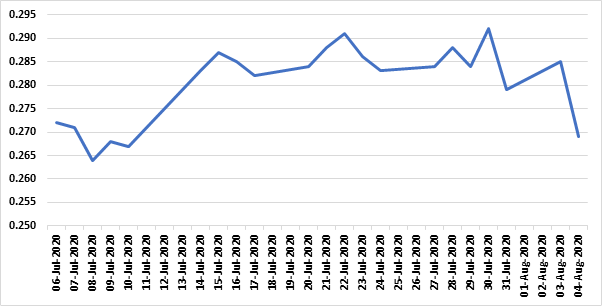 Since hitting bottom in March, financial markets have been efficient and resilient with a large scale funding activities. In Australia, ASX companies have had a decent run in taping investors through placement capacity support by ASIC.

Given the uncertain state of the economy with a hard lockdown in Victoria, it appears that Corporate Australia will continue giving investment proposals to investors, perhaps come with a plan to offload debt or raise hands for survival.

But this money is not just limited to equity markets, there has been a revival in bond markets, especially in non-investment grade market, across markets as companies are refinancing or loading further debt at lower rates.

Federal Reserve in the US is also buying high quality investment-grade bonds through ETFs, while the European Central Bank continues with Asset Purchase Programme. Since yield on 3-year is breaching 0.25%, it also means that investors are selling safe assets.

Some equity indices have been very close to the pre-COVID levels. Mr Lowe said asset prices have increased despite the uncertain outlook and bond yields remain at historically low levels.

Even after efficiently containing the initial wave, the nation finds itself amidst tackling a crisis in Victoria, which has grown stronger and Level 4 restrictions are in place. With these hard restrictions now in place, the loss of demand will likely be significant as only essentials activities are allowed.

Level 4 restrictions are also extended to Victoria for six weeks to contain the spread of the virus. When Victoria achieves similar status as of other states, the state of disaster would be lifted. It will force retailers to close stores, manufacturers to close factories as well as impact construction.

A lot of workers are likely to sit idle for some weeks now given that hard restrictions and fines are in place. Victorian Government is also knocking patients who have tested positive to confirm whether they are self-isolating properly or not.

Moreover, all activities that require high contact remain suspended in the state, jeopardising real economy precipitately for a month. But the State Government has sought to incentivise the businesses.

Mr Lowe noted that the crisis in Victoria could cause major deterioration to the state economy. Given the episodes like this outbreak in Victoria, they continue to anticipate economic conditions to remain volatile in the future.

But he also acknowledged that impact to outlook has been less severe than earlier anticipated and a recovery is underway in most of Australia. Board’s base case scenario is that the output would contract by 6% this year with a 5% expansion next year.

They also forecast unemployment to be 10% in 2020 driven by job losses in Victoria and nationwide unemployed workforce. Over the next few years, it is estimated that unemployment rate would come lower to 7%.

He said that successful containment of virus would be favourable for economic recovery, and an opposite event will equally deteriorate outlook expectation further. The bank anticipates inflation to trend below 2% over the next few years.

Due to spare capacity in the economy, inflation is expected to remain 1% to 1.5% over the next few years. And, the current quarter would reflect a positive inflation given that major driver -oil prices are back to normal level among other reasons.

The Board acknowledged the Government’s extension of income support in the economy and endorsed the extension of policy to support labour markets and economy. The bank is committed to keeping business funding cost low, availability of credit to households, and support income, business and labour markets.