Dacian Gold Limited (ASX: DCN) is an ASX listed metals and mining company, based in Western Australia. The company has established itself as a new mid-tier Australian gold producer, with its first commercial production on 1st January 2019.

The company recently started production at its wholly owned Mount Morgans Gold Operation, situated near Laverton in Western Australia. The first gold was discovered in March 2018.

After completion of the feasibility study, the company received a total project debt funding of A$150 million. Dacian Gold Limited started construction work in early CY17 and gold production in Q1CY18. The project, entailing an investment of A$200 million, was completed on time and within budget. 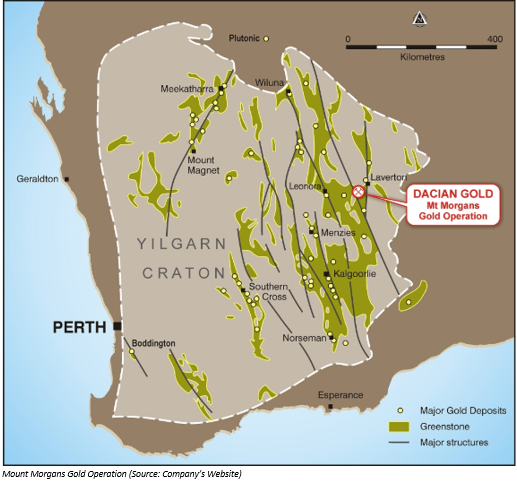 On 5th June 2019, the company announced corporate and project updates.

The company has given revised production guidance for the quarter due to the underperformance of mining contractors and mined grade, primarily at Westralia. The revised production range for the current quarter stands at 36,000-38,000oz at an estimated MMGO AISC of A$1,500/oz - A$1,600/oz.

Additionally, the company suspended gold production for three consecutive days, as the ball mill motor at the processing plant suffered a failure which was irreparable, and a new motor was required to be installed.

The level of productivity was reviewed at the end of May 2019 and was found to have dropped from quarter to date and even below the company’s earlier June 2019 quarter guidance.

Mt Morgans sits at 98% grade control model to mill production reconciliation across all production sources, which confirms an effective agreement between the mill reconciliation and grade control models. For the June 2019 quarter to date, it sits at 85%, which on a monthly basis fluctuates +/- 15%. This variance is common across the industry, and hence, performance assessment of resource models to reconcile mine production takes longer time.

Mining at Westralia has included production from several subordinate mineralised Banded Iron Formation (BIF) lodes. These lodes that were planned to be mined are narrow and high grade, however, higher levels of mined dilution and high-nugget gold distribution in the lodes contributed in the underperformance of the mining of these lodes. The high-nugget/dilution seen in the subordinate BIF lodes are major contributors to the grade underperformance being witnessed at Westralia during the June quarter. 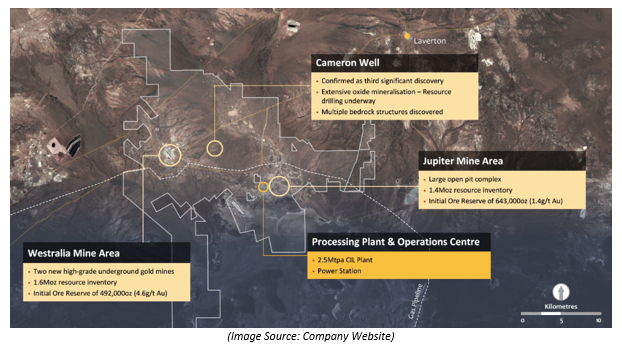 Mining at Jupiter with higher grade Cornwall Shear Zone (CSZ) is doing well with the average claimed grade of (unreconciled) approximately 1.6 grams per tonne of gold to date for the quarter. The lower grade of the hangingwall lodes is due to higher levels of mined dilution for the narrower lodes.

On 1st June 2019, the ball mill motor that runs the mill at the treatment plant went down. The damage was irreparable and required the installation of a new motor unit. The failure resulted in a three-day suspension of gold production.

After two years since the completion of the Mt Morgans Feasibility study, Dacian Gold Limited has improved its structural and geological understanding of Jupiter and Westralia gold deposits, resulting in a better resource modelling and opportunity for the company to continue its exploration success.

At the Mt Morgans site, the reconciliation of the 2018 ore reserves to mill reconciled production is at about 85%, by the ounce for each of Westralia and Jupiter.

Preliminary guidance for FY2020 with 5-year mine plan

Westralia’s production is forecast at approximately 80% for FY2020 with the forecast capital and operational development scheduled to go up in the first half of FY2020.

Based on the improved understanding of geological and structural controls, the company will be able to announce an updated 5-year mine plan for Mt Morgans by end-June.

The initial view of the 5-year mine plan depicts an indicative average annual range of 160,000-180,000 OZ3 per annum, and approximately 60% of the Westralia Ore Reserve has now been infill grade control drilled which forms the basis for the 5-year mine plan.

The company has hired Treadstone Resource Partners to undertake a strategic review, which will look at prospects of corporate and funding initiatives, with the intent on maximising shareholder value.

On 3rd June 2019, Dacian Gold Limited announced that it has requested a trading halt on its listed securities, owing to the pending release of the above-mentioned updates. With the release of pending announcements on 5th June 2019, the stock has resumed trading on the ASX.