If there is any silver lining amidst the dark cloud of coronavirus pandemic, its healing of our planet Earth. With no factories releasing pollutants, no flights emitting chemicals and no vehicles producing smoke, Earth has become a better place to live with an improved quality of air. Instead of human generated noise, sounds of birds chirping have become more common in cities with the absence of humans in COVID-19 induced lockdowns.

As the globe marks the 50th anniversary of Earth Day on 22nd April 2020, let us take a look at how Earth is responding to the unprecedented coronavirus pandemic:

With about half the world’s population under lockdown, geoscientists have recorded a substantial fall in the Earth’s seismic vibrations. It seems that the planet has finally got a chance to rejuvenate itself. A major decline in the human activities in lockdowns has led to this surprising shift in the seismic vibrations.

It is imperative to note that the seismic noise is not only a result of natural disasters like earthquakes but are also caused by the day to day industrial and transport activities, which create considerable pressure on the Earth’s crust.

With a smaller number of people stepping out of their houses, scientists are now getting a rare chance to monitor volcanic activity, small earthquakes and other subtle tremors that are usually aggravated by everyday hustle-and-bustle of human activities.

According to the WHO, air pollution kills around 7 million people across the world each year, with nine out of ten people breathing air with high levels of pollutants. With air pollution being one of the prominent causes of death, a reduction in its levels is certainly a promising development for Mother Earth.

A latest COVID-19 Air Quality Report published by IQAir, a global leader in the provision of air quality data and solutions, suggests that air pollution levels are falling at unprecedented rates (30 to 60 per cent) amid coronavirus lockdowns.

The report states that Los Angeles in early April 2020 was among the least polluted cities across the globe in the wake of improved air quality, marking a great achievement that appeared impossible in weeks before regional shutdowns in California.

The report compared measurements of the globe’s deadliest air pollutant PM2.5, before and during the pandemic in ten major cities of the world under lockdown: Los Angeles, Milan, Rome, São Paulo, Delhi, London, New York City, Seoul, Mumbai and Wuhan. The findings revealed a sharp decline in PM2.5 pollution for majority of the global locations in lockdown. 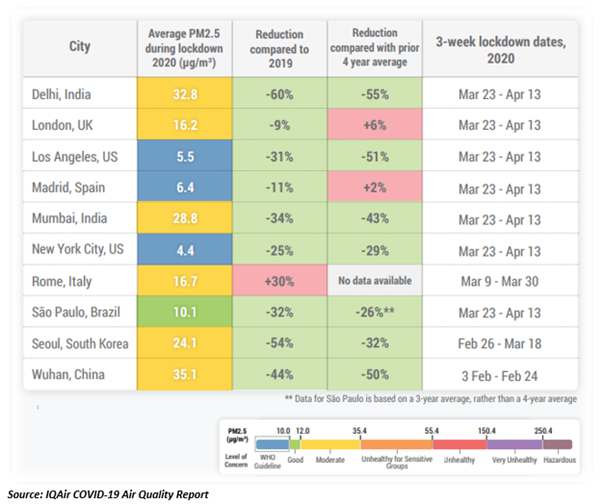 Below are the key findings of the report:

It is worth mentioning that the nitrogen dioxide levels are majorly influenced by truck and car emissions and production of electricity, both of which have significantly reduced as people stay inside to curb the spread of coronavirus.

With signs of rejuvenation visible in our planet, a key lesson has been learnt from the coronavirus pandemic: Humans play a crucial role in Earth’s natural system.

COVID-19 has taught us that we are a part of an interconnected ecosystem and possess the power to change the world. A classic example being the air pollution levels that have declined pretty quickly in several parts of the world amid shutdowns of travel and businesses during the pandemic. Besides, it has tutored that by halting the rampant destruction of rainforests and forests, we can preserve habitat for animals and encourage the growth of air-cleaning trees and plants.

Minimised human activity has enabled the world to breathe better, allowing Earth to turn cleaner and wilder. Additionally, lower human-induced seismic vibration amidst shutdown is a welcoming development for the planet.

However, one need not forget that all these changes are temporary and may not sustain once normal activities will resume. Besides, these developments have occurred at the cost of significant job losses, rising death tolls and slowdown in multiple economies.

On this Earth Day, we all have an opportunity to understand how our collective actions disturb the functioning of the natural system. Moreover, we have a choice to make between living in a better ecosystem or continue keeping our business-as-usual attitude.