Coronavirus has shaken the world economy through its spread taking away human lives and pushing the world into lockdowns and quarantines. Lockdowns have forced several businesses to shut down, closure of schools, travel bans and restricted social gatherings.

COVID-19 originated from a seafood market in the Wuhan district of China and has infected millions of people, taking away a hundred thousands of lives.

The food service sector has been on the verge of shutdown in the EU, China, US and many other countries. A part of food industry that has been severely affected by the virus is the seafood. Seafood production has come to a halt with a stoppage in the fish farms and other related factory work due to lockdown measures and staff scarcities. Stocks are piling up in cold storages with farms placing its operations on a temporary hold.

One such affected seafood entity is Clean Seas, which is an Australian seafood production company.

Clean Seas Seafood Limited (ASX: CSS) is one of the largest farmed kingfish (yellowtail) producers outside of Japan and a world leader in the full cycle breeding and farming of it. CSS asserts to supply best raw fish in the world named Spencer Gulf Hiramasa Kingfish.

The Company has sold the majority of its yellowtail kingfish fresh to high-end restaurants around the world, with farms in the Spencer Gulf and a processing plant in Adelaide but has started to swing the business in the direction of retail markets.

March and April Sales Volumes Affected by the coronavirus

Recently, the Kingfish (yellowtail) producer of Australia released an update on its business operations and cash flow statement for Q3 FY20. The government imposed social distancing restrictions significantly affected the company’s restaurant business globally. The Company reported a decline of 14% and 15% in the sales revenue and sales volume for Q3 FY20, respectively. The sales were down by 43% in March alone. However, its year-to-date sales revenue were still up by 4% in FY20 compared to FY19.

Clean Seas believes in retaining circa 30% of prior year sales during April in its largest market Australia accelerated by 116-tonne sale to Hofseth, which the firm sees as positive news in relation to internal prospects given that most of the in-restaurant dining has been shut for the past 6 weeks.

CSS notified the market on a strategic association with the Hofseth Group and Nevera AG on 6 April. Hofseth, leading Norwegian aquaculture producer invested $5 million at a 13.5% premium. The strategic association is believed to assist CSS in diversifying sales into new geographies complementing its business through increased scale and volumes in order to reduce per-unit costs (production, processing, distribution and overheads) of the Company.

Clean Seas plans to leverage Hofseth’s relations with retailers to initiate rapid development. Apart from this deal, Hofseth North America has agreed to purchase 116 tonnes of frozen inventory and is finalising product trials with one of the largest retail chains in North America. 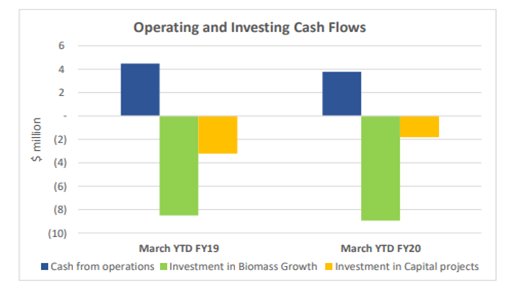 CSS has acknowledged operating costs savings of above $5 million over the remaining portion of this year and asserted on having a strong balance sheet to handle the shift with cash and facilities amounting to $48.2 million (as on 31 March 2020).

Fish health continues to remain excellent with Live Fish Biomass reaching an annual seasonal peak of 4,853 tonnes as of 31 March 2020. However, biomass is 18% higher than what it was 12 months earlier, showing lower harvest volumes due to COVID-19 disturbances.

By using its widely acclaimed liquid nitrogen freezing technology, the Company has the capability to maintain fish health and enhance working capital. The current biomass also places CSS in a good position for sales growth in retail and foodservice channels in future when lockdowns ease and markets recover globally.

Clean Seas is in the process to finalise the design and plans to buy processing and packaging equipment needed to deliver the in-house ability for new retail product formats. The Company is also working to acquire the accreditation certification essential to supply retail products which it expects to be operational by Q2 FY21, either through an upgrade to its Adelaide processing facilities or by using third party contract processors within Australia or overseas.

The Company has also developed a new brand which will be used to target new market segments and distinguish products from its premium foodservice branding, Spencer Gulf Kingfish and SensoryFresh.

Australia has been flattening the coronavirus curve more than the other developed nations of the world, which is an encouraging sign for Clean Seas to reopen its largest market.

Although COVID-19 crisis may have delayed the achievement of its growth strategy, the Company is optimistic that the recent deal with Hofseth group and entry into retail product distribution will deliver growth through new channels which will complement CSS’s wholesale restaurant and premium food sale business.

The Company has reviewed its non-essential costs and existing stimulus actions of government and plans to reduce its cost base by more than $5 million over the remainder of 2020.

Clean Seas has twin advantage of supplying extraordinary product and robust balance sheet to carry out changes and implement new schemes to wriggle out from COVID-19 disruptions by using a more viable business model.