On 3 June 2020, OPEC held its 133rd Meeting of the Economic Commission Board, which was initially being speculated by the market to lead to a production cut extension; however, while both the Saudi and Russia are pushing for a production curtail, many OPEC+ members are still reluctant, and OPEC would release the final discussion by 7 June 2020.

While addressing the conference, the OPEC Secretary General- HE Mohammad Sanusi Barkindo discussed about the challenges currently being faced by oil-producing countries and the overall oil market along with actions taken by OPEC to bring stability into the fold, the Secretary General also signalled that the OPEC would wait for further data gathering to devise an appropriate response.

HE Mohammad Sanusi Barkindo of concluded the conference with the following statement and suggested that further decision would be communicated to the market.

While the market speculated that the meeting would lead to a likely extension in the production cut deadline, it did not give up hope after the meeting as the OPEC made it clear that it would further gather and analyse data which should assist them in devising the future plans.

Oil market remained stagnant and the price of Brent crude oil futures remained glued in the range of USD 39 to USD 40 per barrel.

The global oil exploration is already under a declining trend and OPEC along with many other organisations such as the United States Energy Information Administration believe that the current low oil price environment would further knock down the global exploration expenditure. EIA had recently put out an estimate on crude oil prices and as per the estimate crude oil to trade at USD 34 per barrel in 2020.

During the conference, the OPEC Secretary General suggested that the cartel now anticipates the CAPEX in non-OPEC countries to drop by 23 per cent on a y-o-y basis during the year to stand close to half of the record expenditure of USD 741 billion, seen in 2014.

Oil Production and Consumption Scenario Across the United States

Apart from Russia and Saudi, the United States has also committed to bring stability into the oil market by curtailing domestic production. The domestic oil production in the United States is currently witnessing a downtrend, and last week it further plunged to 11.2 million barrels per day (for the week ended 29 May 2020) from its record average levels of 13.0 million barrels per day seen during the end of the year 2019. 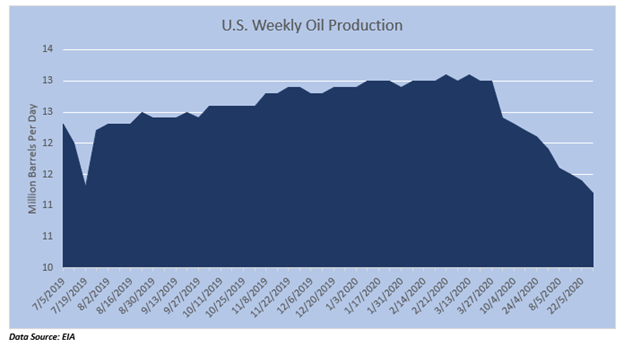 On the demand counter, in the recent past, the demand for OPEC crude across the United States surged post the crude oil inventory across the nation witnessed a drawdown of 5.0 million barrels (for the period ended 20 May 2020).

During the same week (ended 22 May 2020), the overall imports of oil across the United States reached to almost a 10-month high of 7.2 million barrels per day. 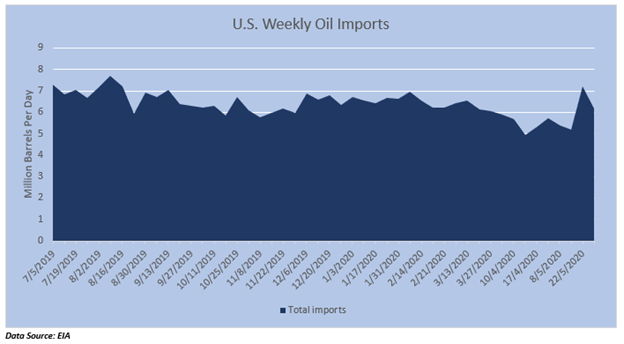 However, post a spike in net imports, the following week crude oil inventory across the nation (excluding SPR) witnessed a build of 7.9 million (as on 28 May 2020), which further allowed a little cooling in net imports, which plunged to stand at 6.1 million barrels per day (for the week ended 29 May 2020); however, remained considerably higher against the past few weeks.

To conclude, the OPEC and members are still to take a call on any decision related to the extension in the production cut deadline and as they await further data gathering and analysis. However, OPEC Secretary General had provided an assurance to oil-producing countries that the organisation would take all relevant measures to bring stability in the oil market, which in turn, is providing a cushion to the Brent crude oil price which is hovering in the range of USD 39 to USD 40 per barrel.

The oil exploration and development expenditure are estimated by both OPEC and the U.S. EIA to decline ahead.

Furthermore, the United States is decelerating its domestic crude oil output, which has now plunged to a weekly level of 11.2 million barrels per day. Also, the current oil imports are large against its recent past levels.