Natural gas plays a vital role as a sustainable, economical and environmentally cleaner source of energy. LNG sector takes pride in generating 50% less Green House Gases (GHG) than coal for generating power, 21% less than conventional fuel in transport and above 95% efficient for domestic heating solutions. With the constant advancement in technology, there has been a marked reduction in emissions and increased efficiency across the LNG value chain.

The Global LNG trade in 2019 grew to 354.7 MT, registering a growth of over 13% or 40.9 MT on y-o-y basis. The Asia Pacific and Asia in total imported over 70% of the global LNG imports, with the unexpected but significant increase of over 32 MT coming from Europe. Besides, in 2019, Australia, Russia, the US and other major producers sanctioned over 70.8 MTPA liquefaction capacity and 41.8 MTPA of capacity which commenced operations in 2019. Additionally, projects with capacities over 907.4 MTPA are being evaluated, waiting for the final investment decisions with major additions planned in the US, Canada, Africa and the Middle East.

The LNG shipping industry added 42 new vessels in 2019 totalling at 541 active vessels. By the end of 2019, a total of 37 markets globally are now equipped to import LNG with the addition of regasification facilities and new terminals globally. The implementation of the International Maritime Organisation’s amendment on the sulphur limits in the marine fuel to 0.5% on a mass basis, was effective from 1 January 2020. LNG emerged as a possible alternative for conventional marine oil and offered better efficiency at lower costs. Further continued investment in the LNG infrastructure would establish LNG as the newer standard for marine fuel. 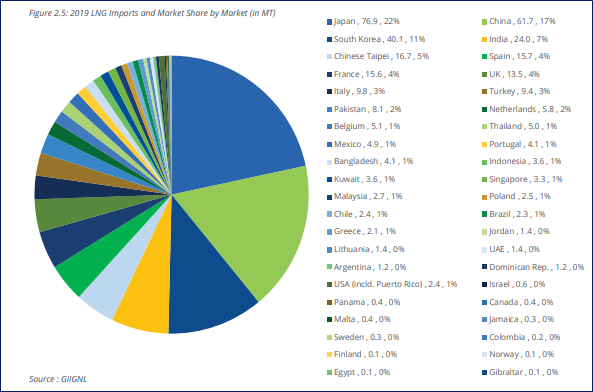 Although new regasification facilities were added, no cargo deliveries were taken by the newer markets by the end of 2019. The new markets which started importing between 2015 and 2018 including Bangladesh, Pakistan, Poland and Panama significantly increased their imports in 2019. Though the newer markets performed well, they were nowhere close to the increase from Europe which added almost 32 MT of imports in 2019 majorly from economies such as the UK, France, Spain, Belgium, Italy and the Netherlands. Asia Pacific continued to be the largest importer with 131.7 MT.

Driven by warmer winter seasons, gas prices and change in the authentic energy mixes, the larger markets including Japan and South Korea saw imports declining. China, the second largest importer after Japan, saw a decrease in growth of consumption as the country ramped up domestic production, added huge renewables to the energy mix and slower coal to gas transition. Europe almost doubled its imports majorly due to the lower LNG prices. LNG has been facing an oversupply issue, degrading its prices significantly.

Asia pacific continue to serve as the growth region for LNG trade, with the substantial increase in production from Australia and Papua New Guinea. As for the annual volumes Qatar barely maintained the leader’s position as the largest exporter with over 77.8 MT in 2019, with stiff competition from Australia with exports volume of over 75.4 Mt, a 13% yearly increase fuelled by the major commencement of projects such as Ichthys LNG T1-2 (8.9 MTPA) and Prelude FLNG (3.6 MTPA). Fuelled by the addition, Australia achieved the title of the largest LNG exporter in August last year.

Declining Prices in The Oversupplied Market

Driven by growing natural gas output, lack of demand from Asian countries and addition of new export infrastructure, an oversupply of LNG persisted in the market driving the LNG prices to record low levels. The warmer than normal winter and coronavirus outbreak further limited the demand for the LNG in 2020. The Japanese Korean Marker, the benchmark standard for most of Asia, 1-month future trades under $2 per MMBTU on 8 May 2020.

The lockdown restrictions across the globe, restricted almost half of the world’s populations within their houses, destroying the gas demand in the world’s largest LNG markets. The demand dip lead the Asian spot prices to the record low levels with major supplier cutting down on the production volumes.

Largest markets including Japan, China, South Korea and India, the Big 4, all experienced a dip in demand, plummeting the gas prices further. At a price point of US$2 per mmBtu leaves almost no margin for majority of the operations against their cash costs. There might be extensive shutdowns in the times to come. Slower demand has been observed in markets such as China and South Korea, which although have lifted the lockdown restrictions but with stringent social distancing measures in place in others, the manufacturing industry are operating at restricted utilisation rates.

LNG Market Overview and Responses Amidst COVID-19: Must Read

Australia’s Take on The Rock-bottom Prices

With majority of the LNG trades carried out through long term contracts. LNG players such as the Woodside have long supply contracts at fixed prices which hedges their risks against the low prices. However, not all the contracts are fixed priced. The coal to seam gas faces immense pressure to cut supply as the current prices are practically not viable. With mega CSG projects such as the Australia Pacific LNG, the major players have managed to cut down the cash costs of their operations significantly in the past few years and sell majority of the output from the APLNG through long term contracts and only a small fraction on spot prices, some of the LNG players are actually better placed than others with guarantee of demand from the contract partners. Fraction of LNG which were sold on spot basis may be trimmed to further minimise the risks.

The Australian industry leader, Woodside Petroleum Limited (ASX:WPL)supplies over three quarters of its production under pre- contracts and stated complexities in case of cutting down the output. Although some of the sales contracts does allow to supply lower quantities in certain years, Santos and Origin Energy anticipate a lower LNG supply this year.