ASX-listed gold stocks have emerged as one of the top-performing assets with returns from some such as Saracen Mineral Holdings Limited (ASX:SAR) even outperforming gold on a YTD basis. On the other hand, some ASX-listed gold stocks such as Northern Star Resources Limited (ASX:NST) are gaining momentum over high exposure in the gold spot. Gold spot is currently trading at record value of USD 1,981.13 per ounce (as on 28 July 2020 11:41 AM AEST), crossing its 7-year-old high recently.

The higher inflow from the global gold-backed ETFs along with hedging of central banks against the tumbling U.S. dollar is fanning the gold spot. The U.S. dollar index, which typically tracks the performance of the U.S. dollar against a set bucket of currencies has headed south with the index reaching near the two-year low of 93.48 (intraday low on 27 July 2020).

While dollar prices have been taking a hit, gold has been contouring record highs, and some large investment banks such as Goldman Sachs even assess that the gold spot could reach USD 2,000 per ounce in the short-run, which at current prices does not seem like a stretch.

Furthermore, the uncertainty about global economic recovery is also fanning the safe-haven prices. Many economists are taking down on columns to express their opinion on how the global economy is all set to recover; however, conjointly many economic forecasts are reflecting on the fact that the recovery may come in various shapes.

The COVID-19 pandemic is having a devastating impact on the global economy, and moreover, many prominent organisations such as the International Monetary Fund (or IMF) assess that the global economy would deteriorate ahead, leading to a high level of unemployment and wealth destruction across the globe.

Such anticipation along with the recently surfacing optimism in various economists columns is suggesting that the upcoming recovery is morphing into a W-shaped recovery, which is posing a lot of market uncertainty for investors, leading to a rush towards safe-haven asset such as gold and even bitcoin.

Correspondingly, the gush in gold is further diverting attention of many market participants towards ASX-listed gold stocks, prompting some of them to climb a record high and some to clinch multi-period highs.

Gold stocks or buying shares of a company directly engaged in exploration and selling of gold is now emerging as the most preferred route to take exposure in the bullion rally.

While there has a been a lot of uncertainty in the market, many participants especially retail investors are looking to take exposure in the gold rally, and thanks to expensive gold along with high margin requirements (considering the recent volatility) in taking exposure into futures contracts- a primary medium to take direct exposure in the gold market, gold stocks are witnessing a large influx.

Such an influx has pushed gold stocks to uncharted waters and coupled with prevailing market sentiments, have ignited a rally in gold stocks. 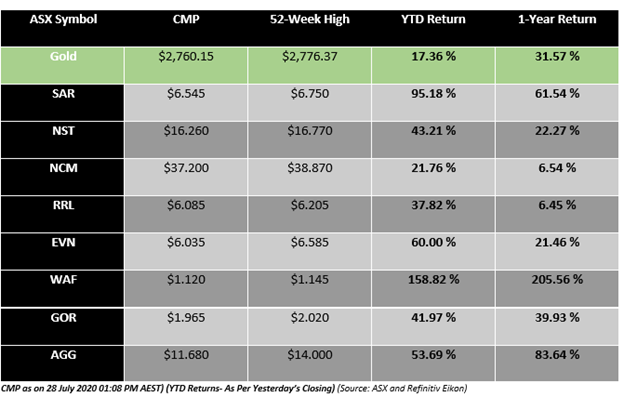 Also Read: Commodity Stocks Making Their Way To The Top