Crude oil prices extend their gains on Wednesday after settling higher on Tuesday as the market weighed China's plans to support its economy against a possible coronavirus lockdown in its capital Beijing.

The country’s central bank said that it will step up cautious monetary policy to support the economy which would eventually boost oil demand.

The oil traders across the globe are focusing on more stimulus coming from China, keeping aside the fears of Beijing lockdown.

On Monday, crude oil prices tumbled nearly 4% to reach their lowest level in two weeks. The significant drop in oil prices was primarily attributed to growing worries about the global energy demand outlook amid severe lockdowns in China, the biggest importer of crude oil in the world.

The prospects of slower economic growth and the possibility of US interest rate hikes have already squeezed the oil demand forecast which is further pressurised by the Russia-Ukraine war and ongoing lockdown in various parts of China.

The prices of both crude oil benchmarks reached their lowest level since 11 April and collapsed by nearly 25% since soaring to their highest level since 2008. 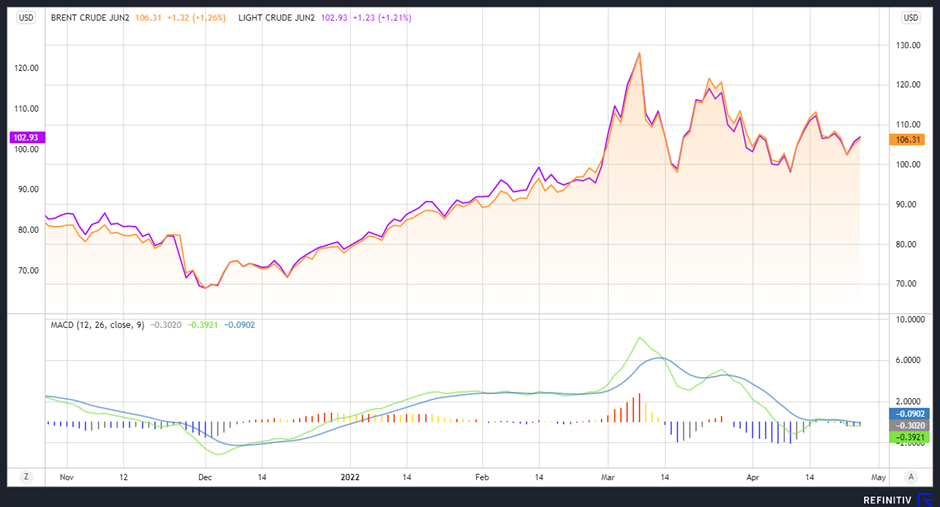 Russia-based Gazprom warned Poland’s PGNiG to halt gas supplies along the Yamal pipeline from Wednesday morning. The country is demanding payment in Rubles from Poland which is likely to result in a halt in gas supplies.

The news sent NYMEX ultra-low-sulfur diesel futures up more than 9% on Tuesday to settle at a record close of US$4.47 a gallon.

In addition to this, the European Union continued to consider options to reduce imports of Russian oil as part of possible further sanctions against Russia over its invasion of Ukraine. However, nothing has been formally proposed yet.

Furthermore, as per the American Petroleum Institute (API) U.S., crude stocks rose by 4.8 million barrels last week, phasing out the supply concerns to a certain limit.

Crude oil prices rose on Tuesday after falling nearly 4% on Monday due to lower demand from China amid the ongoing lockdown in various parts of the country.