The crude oil market was impacted by the dual-edged gizmo of strong build up across the United States commercial crude oil inventory (excluding the strategic petroleum reserve) and Fed’s anticipation of a 6.5 per cent decline in the U.S. economy for the year, which once again, raised speculation concerning the oil demand, and the price fell, despite ongoing measures taken by OPEC and allies to trim the volatility down.

Recently, OPEC had decided to extend the previous deadline of ongoing commitment, under which OPEC and allies are trimming 9.7 million barrels of production per day, by another month- now till July 2020, and apart from that the cartel had allowed some time to members who have not been complying with the landmark agreement.

A few days back, Nigeria suggested that it would now fully comply with the OPEC agreement and would bring down its production.

Apart from that, the oil kingpin-Saudi Arabia, UAE, and Russia had decided to pull another voluntary production cut of 1.18 million barrels per day till July 2020.

While OPEC and allies along with other significant oil-producing countries such as the United States are playing the card of production cut, the speculation related to demand is now pulling the major strings in the oil market, keeping a lid on the ASX-listed oil & gas stocks, which so far followed the oil market lead.

Oil prices took a hit of ~ 7 per cent on 11 June 2020 after the United States Energy Information Administration (or EIA) reported a surge of 5.7 million barrels in the U.S. commercial crude oil inventory (excl. SPR), which took the total inventory to 538.1 million barrels (as on 5 June 2020), which in turn, took the inventory about 14 per cent above the five year average for this time of year. 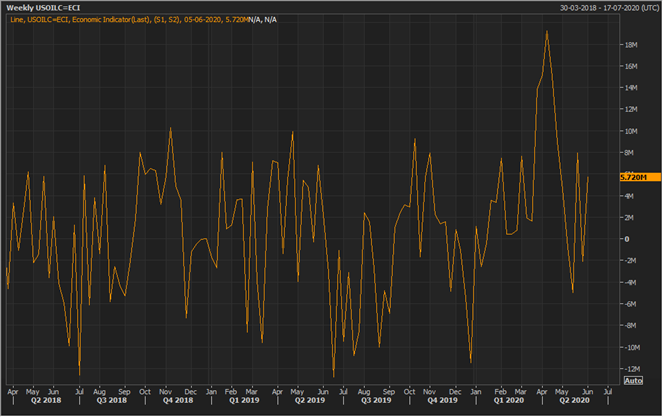 The sharp build up in the commercial inventory across the United States once again concerned the investing community over the global oil demand, which is yet in peril, and the production trim would not be the cure-all for the oil market.

While the fall in the oil market was evident, some independent analysts believe that it was a result of a speculation and market panic considering the sharp build up in the U.S. commercial inventory, and the long-term prospect of oil would depend upon the demand from China and many other oil-consuming nations.

While the production cut is coming closer to the estimated decline in the demand by OPEC, the market is now concerned about the demand, and indication concerning the global oil demand would dictate the price action going forward.

The same could be confirmed by observing the CBOE oil market volatility index and the recent price behaviour of the crude oil prices. 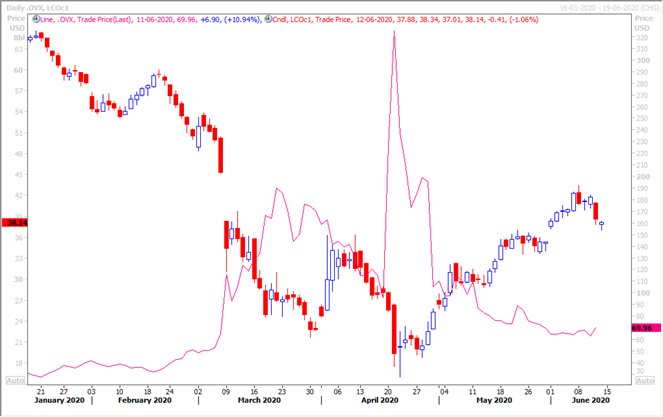 Recent efforts by OPEC and allies, which might not be working in the short-term, has now somewhat induced a fear related to the supply, which could be inferred from the U-turn witnessed in the CBOE crude market volatility index.

The CBOE crude market volatility index usually moves opposite to the crude oil prices, but in the recent past (May-end) it has witnessed a slight spike in the direction of the price trend, and it is again turning upward towards the price direction, suggesting that the market has now somewhat started factoring the supply curtail by OPEC and allies.

In a nutshell, while OPEC and allies are trimming the production and promising partners that it would take all relevant measures to bring stability in the oil market, market participants are closely responding to the demand factor, leading to a price fall in ASX-listed oil & gas stocks.

The sudden build up in the U.S. commercial crude oil inventory along with the Fed’s outlook on the domestic oil has once again brought the demand outlook as the agenda behind the crude oil market movement; however, considering the recent U-turn (small) in the CBOE crude oil volatility index, it could be inferred that though the supply fears are not playing the major card on the table, the market is somewhat factoring the OPEC’s measures to address the supply glut.