Leading pure-play metallurgical (coking) coal project developer, Aspire Mining Limited (ASX: AKM) announced on 11 November 2019 that it has received additional commitments in connection with the proposed $ 33.5 million equity investment in the company by its major shareholder Mr Tserenpuntsag, who is also a leading strategic partner in the development of the 255Mt total Reserve flagship premium “fat” coking coal Ovoot Project in Northern Mongolia.

Mr Tserenpuntsag is the owner of / built the largest internet service provider in Mongolia, enjoys the exclusive distributorship of Pepsi in the country and holds a major stake in Mongolia’s largest satellite TV business. He is a successful businessperson with an impressive track record of establishing large scale businesses in the country. Being Aspire Mining’s largest shareholder with a 27.7% interest, he committed to provide strategic and financial support for the materially de-risk delivery of the Ovoot Early Development Plan (OEDP), the first stage of the Ovoot Project. 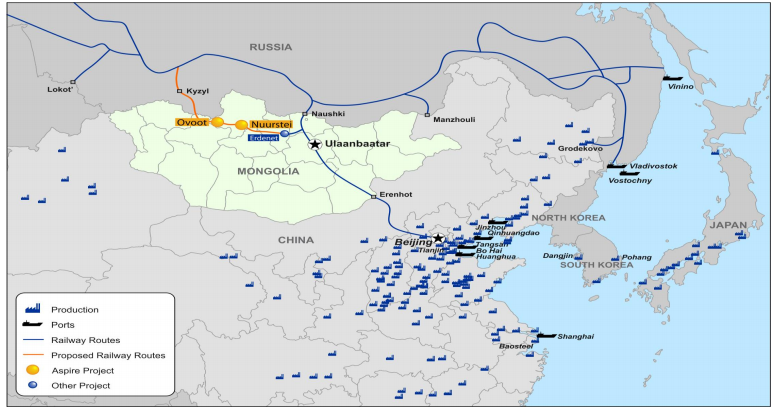 Mr Tserenpuntsag informed that he would exercise his holding of 153.3 million listed options at 1.8 cents each, that have the expiry date of 11 December 2019, subject to shareholders approving the same at the company’s upcoming Annual General Meeting on 29 November 2019. The exercise price of 1.8 cents is approximately 50% above the current share price of 1.2 cents and provides further evidence of strong ongoing financial support being extended by Mr Tserenpuntsag to the company at a crucial time when it is targeting to move into production in the near term while completing the Definitive Feasibility Study (DFS), securing necessary approvals from the local community for completion of infill and other technical drilling.

Aspire Mining has actively engaged with its shareholders concerning the extent of minority shareholder representation on the Company’s Board ever since the proposed placement was announced to Mr Tserenpuntsag on 6 September 2019.

In the Subscription Agreement signed with Mr Tserenpuntsag, it was specified that if the proposed placement is executed, Aspire Mining’s Board would be reduced to five Directors with two Directors nominated by Mr Tserenpuntsag. He Promised to ensure maintenance of this Board structure for a minimum of six months post placement.

In order to ensure a fair representation for minority shareholders, Aspire Mining has held further discussions with Mr Tserenpuntsag who then agreed to provide additional commitments regarding Aspire Mining’s Board as follows:

Mr Tserenpuntsag has agreed that as long Noble Group holds more than 9.9% of the issued capital of Aspire, it may maintain the right to nominate a Director on the Company’s Board.

Stock Performance : Aspire Mining’s market capitalisation is around $ 46.57 million with ~ 3.33 billion shares outstanding. On 12 November 2019, the AKM stock settled the day’s trade at $ 0.013. The stock has generated a positive return of 7.69% in the last six months.