Australia’s leading banking group, Commonwealth Bank of Australia (ASX: CBA) has announced that its 2.00% five-year Covered Bonds due 18th June 2019 will be suspended from quotation at the close of trading today (30th May 2019). The Notes will be finally removed from Official Quotation with effect from the close of business on Wednesday, 19th June 2019.

CBA today, in another announcement, advised that it has become a substantial holder of Ardent Leisure Group Limited by holding a total of 24,074,358 fully paid ordinary shares with 5.02% voting power.

CBA, progressing on its strategy of becoming a simpler and better bank, was able to generate sound fundamentals in the third quarter of FY19, despite challenging operating environment. 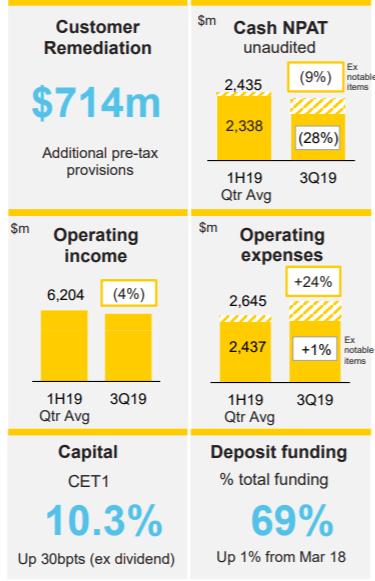 During the quarter, the bank was able to maintain its capital and balance sheet strength. As at 31st March 2019, the bank had Common Equity Tier 1 (CET1) APRA ratio of 10.3%, Leverage Ratio of 5.4% (APRA basis) and Liquidity Coverage Ratio (LCR) of 134%. After allowing for the 80 basis points impact of the 2019 interim dividend, CET1 increased 30 basis points in the quarter with capital generated from earnings partially offset by higher total Risk Weighted Assets (RWA).

In the past few years, the bank has introduced a range of new customer initiatives (as shown in the graph below), which are expected to result in a total annualised income foregone of $415 million.

Income Foregone by Date of the Initiative (Source: Company Reports)

During the quarter, CBA recognised additional pre-tax customer remediation provisions of $714 million, which was used to address the full range of remediation issues impacting CBA’s customers.

During the quarter, the bank announced the divestment of a number of businesses include a sale of CommInsure Life (CMLA), which is expected to be completed in the second half of the calendar year 2019.