Bryah Resources Limited (ASX: BYH) operates as a mineral exploration company and primarily engaged in the discovery and development of copper and gold resources in Australia.

Today, on 30 May 2019, the company announced that the Stage 1 of manganese exploration drilling within the Bryah Basin in central Western Australia had been completed. The drilling work had commenced earlier this month (as reported on 7 May 2019).

Bryah Resources is managing the drill programme and the funding is being extended by OM Manganese Limited (OMM) as per the recently executed AU$ 7.3-million Manganese Farm-In and Joint Venture agreement between Bryah and OMM, a subsidiary (100%-owned) of OM Holdings Limited (ASX: OMH). Pursuant to the terms of the agreement, OMM is providing $500,000 of the manganese exploration (see Figure 1) until 30 June 2019. 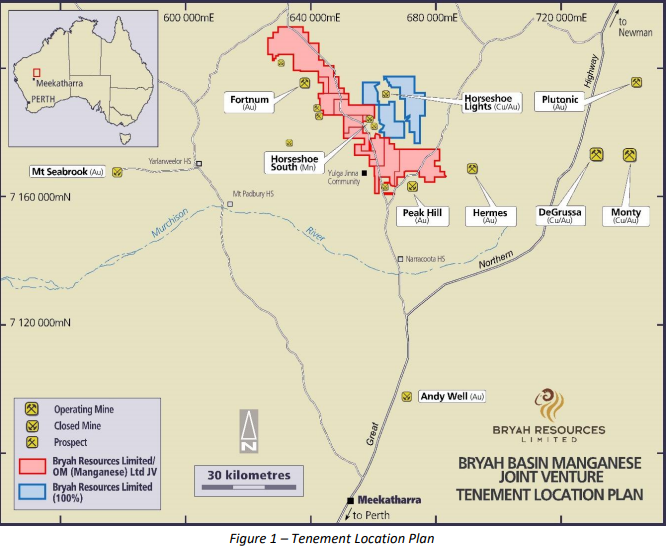 The reverse circulation drilling involved a total of 122 holes to the depth of 3,062 metres, and the drill was completed in this programme at four sites-the historic Horseshoe South Manganese mine, the Brumby Creek and Devils Hill Prospects and a nearby prospect named Black Cat (see Figure 2). From this programme, a total of 1,354 one metre interval samples from the Horseshoe South Extended and Brumby Creek areas have been delivered to a laboratory in Perth for analysis. The assay results are expected to be received in June 2019. An additional consignment of samples from the Devils Hill and Black Cat Prospects will also be sent to the laboratory in the near term. 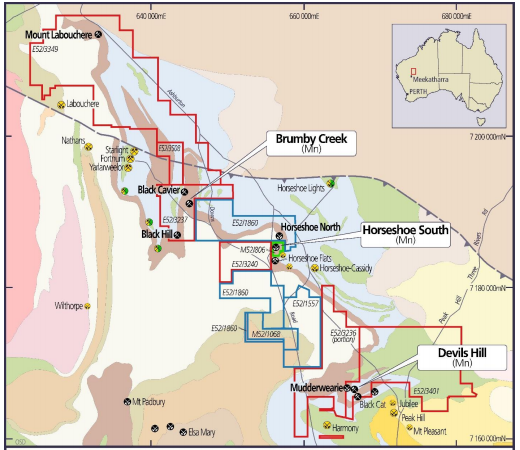 Going forth, a follow-up drilling programme is currently planned to commence in June 2019.

Key Features of Farm-In and Joint Venture Agreement are as follows:

In April 2019, Byrah announced to have exercised the option to obtain the Horseshoe South Manganese Mine, as well as the rights to mine manganese ore over a further 154 km2 within the Bryah Basin. As reported on 29 April 2019, the company completed the purchase for a total consideration of AU$ 340,000.

Around 1 million tonnes of high-grade manganese ore had been produced during 1948-1969 and 2008-2011 from Horseshoe South, which covers exploration licenses including M52/806 and a smaller satellite deposit located on E52/1860.

Bryah Resources has also recently released its Quarterly Activities Report, for the period ended 31 March 2019, mainly touching upon the above developments. The cash at hand, at quarter end was around AU$ 457K.