While addressing the shareholders at the AGM, the company’s Chairman told that the year 2018 was a transformational year for the company. The company believes that it is well positioned for a positive future, both on and off the field. Careful planning by the Board, and its CEO Paul White and his executive team, continues to position the Brisbane Broncos to further grow the commercial business and its investment in community programs that change young people’s lives. The company reported 9.5% sponsorship growth in 2018 due to a stable portfolio of committed partners. The Group recorded gross revenue of $51.8 million for FY18 which was 11% higher than the previous corresponding period. The company’s revenues were boosted by the increased Club Grant, increased sponsorship sales and increased funding for the expanded community programs, being largely cost recovery revenue. The Group expenditure increased by around 15% during the year to $48.7 million. 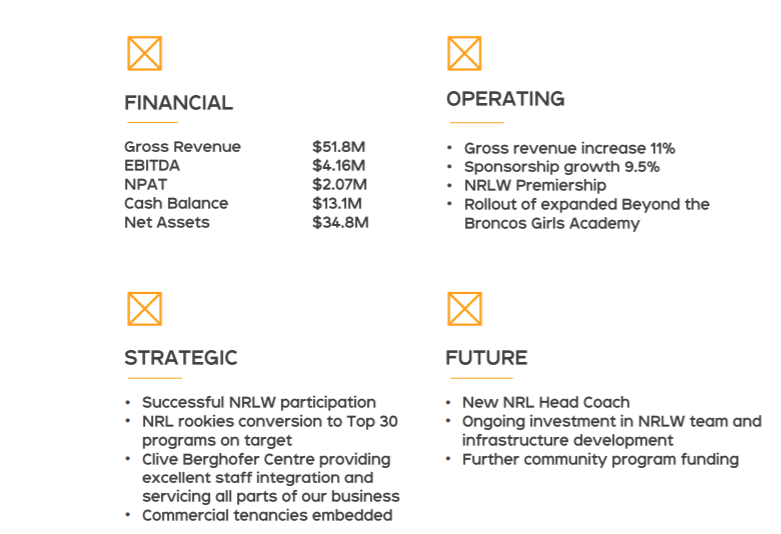 The Group’s profit after tax decreased by 25% in FY18 and reached to $2.1 million. The financial result are reflecting the company’s solid underlying commercial business and cash position which was impacted by the net costs of participation in the inaugural NRLW competition, home game related shortfalls, coaching and player related restructure costs, an increased spend in resourcing the expanded funded Indigenous and Community Programs, a reduction in interest revenue and a full year of depreciation of the Clive Berghofer Facility. At the end of FY18, the company had Cash balance of $13.1 million.

On 20 February 2019, the Company’s Board of Directors declared a fully franked final dividend of one cent per share in respect of FY18 and the dividend was paid on 10 April 2019.

With a strong executive team and restructured football department, the company is moving forward under its strategic plan, focused on delivering further growth and striving for further on-field success. The company is seeking opportunities to partner with business and government to further expand its reach. The company’s Management believes they have taken appropriate steps to ensure that the Group is strongly positioned to deal with current economic uncertainties and capitalise on future opportunities to grow returns on investment.