Commercialising a portfolio of biomedical technologies sprouting from combined research by renowned universities, hospitals and medical colleges across the country, the company is flourishing with its strategic investments in Cortical Dynamics Limited and Molecular Discovery Systems. The company owns 4.56 per cent share in Cortical, with a right to increase the share to up to ~14 per cent.

Corticalâs Brain anaesthesia Response Monitoring System known as âBARMâ uses an algorithm based on physiological principles, in comparisons to the empirical principles used by the current global market leading depth of anaesthesia monitors to analyse an individualâs brain waves through EEG and provides two indices:

BARM calibrates anaesthetic monitoring specifically to the individual patient rather than using a statistical average which its major global competitors BIS & E-Entropy do. BARM also monitors a wider range of drugs than BIS and E-Entropy.

Cortical after recently having their manufacturing facility in Scoresby, Victoria audited by South Korean auditors are pleased to announce that their distributor, Globaluck, who are the exclusive distributor of Corticalâs BARM in South Korea, received their KGMP certificate of approval for BARM (Class II Medical Device) from the Korea Good Manufacturing Practice (KGMP) on the 25th September 2019. Corticalâs BARM has TGA approval and CE. 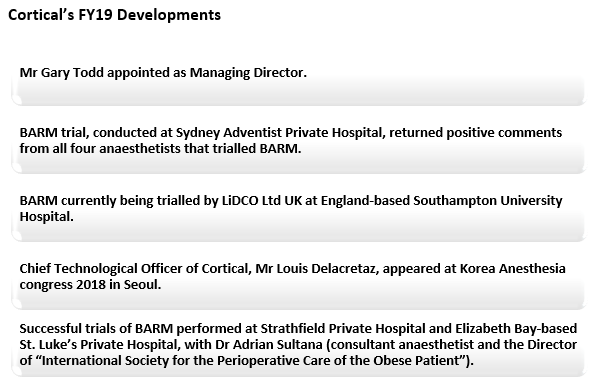 It has been reported that one in one thousand (1/1,000) patients a year have been reported to âwake-upâ during operations and such occurrences are regarded as catastrophic events which can have both serious physical and psychological ramifications for patients.

Too much anaesthesia administered to a patient could result in post-operative complications, extended stays in hospital, Personal distress and discomfort for patients ranging from slow recovery to severe conditions including PTSD.

What makes BARM stands out?

There are many EEG based monitors available in the market, but they come with the following well-documented limitations:

BARMâs distinctive advantages to the current global market leading depth of anaesthesia monitors of E-Entropy from GE and BIS from Medtronic can be viewed in the comparison table below. 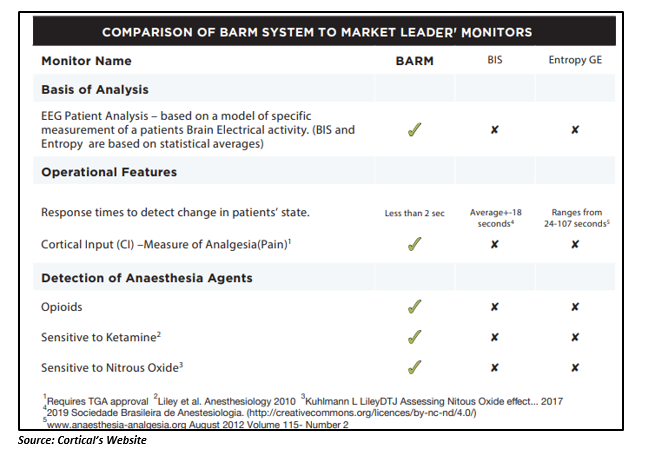 Vibrant Market Opportunity Ahead for Cortical

Currently, the demand for EEG devices among healthcare providers is rising substantially. The global brain monitoring market spawned about $US 3.8 billion in 2017 and is likely to flourish further to reach $US 1.6 billion by next year. Moreover, the pain monitoring market is predicted to grow to over $US 8 billion.

With about 312 million anaesthesia-based major surgical procedures conducted every year worldwide, there are exciting market opportunities ahead for Cortical.

Moreover, there are substantial market opportunities for Cortical in Europe alone in the Total Intravenous Anaesthesia (TIVA) market. Within Western Europe there are approximately 29 million major surgery cases annually with anaesthesia, of which:

This creates a sizeable market opportunity for Cortical in Europe of between $US 120 million to $US 330 million.

In a nutshell, there are abundant market opportunities for Cortical, that would enable the company to expand its footprint across Australia, New Zealand, Europe, Asia, UK and the USA. Corticalâs unparalleled business strategy for success in the brain monitoring market is likely to illuminate BPH Energyâs growth prospects further.

(Source of information provided by the client: BPH Energy with excerpts from Cortical Dynamics).

Tags:
Healthcare ASX: BPH
All pictures are copyright to their respective owner(s).Kalkinemedia.com does not claim ownership of any of the pictures displayed on this website unless stated otherwise. Some of the images used on this website are taken from the web and are believed to be in public domain. We have used reasonable efforts to accredit the source (public domain/CC0 status) to where it was found and indicated it below the image.