Australian based resource Explorer, Blina Minerals NL (ASX: BDI) has recently released an update on the Barkly Gold-Copper Project, situated in the Northern Territory, Australia. The company notified that a Reverse Circulation (RC) exploration drilling program is likely to commence at the Bluebird Prospect, part of the top-grade Barkly Gold-Copper Project, within the next seven days.

Take a look at Blinaâs other key projects HERE.

Blina informed that Bullion Drilling Co. has been appointed for the RC drilling program, and rig and crew mobilisation will occur shortly. The drilling program will comprise of about 1,320 metres of RC drilling across six drill holes to examine the down plunge/dip extensions and extensions of the top-grade mineralisation at the Bluebird Prospect.

The drilling program has been designed for testing the following aspects:

The company notified that the current and follow-on phases of drilling at Bluebird prospect are targeted to broaden the mineralisation to the east, west, and at depth.

The project is regarded as highly prospective for magnetite hosted gold-copper, identical to other deposits found in the Tennant Creek Goldfield. Barkly is situated in the same geological province as Westgold Resources Limitedâs (ASX: WGX) Rover project currently being spun out to Castile Resources, impressive investor interest in the Tennant Creek area.

It is the highest priority and most advanced target within the Barkly Project, comprising a 1.6 kilometres long gravity ridge open to the east, where shallow geochemical drilling spotted a 600 metres long copper anomaly, also open to the east, covering a zone of gold-copper-bismuth mineralisation.

Recent exploration drilling undertaken at the Bluebird Prospect returned significant Au-Cu-Bi mineralisation intersections, that are highlighted in the below table: 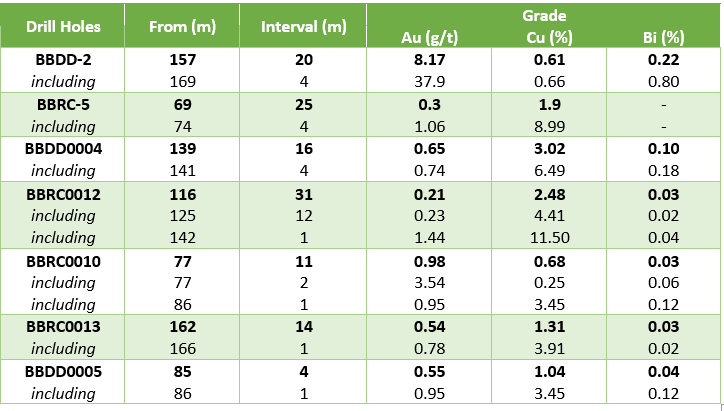 The company noted that additional exploration targets with similar geochemical and geophysical responses along strike from the Bluebird Prospect have been identified, and further drilling is planned to test these targets. The companyâs systematic close spaced drilling intends to accurately define the geometry and the grade of the familiar Au-Cu-Bi mineralisation.

Blinaâs primary aim is to finalise further drilling to estimate a JORC compliant mineral resource at the Bluebird Prospect and to develop a mining project eventually. The company will focus its corporate strategy and exploration efforts towards the development of the Barkly Gold-Copper Project.