Recently, on 22nd May 2019, Blaze International announced to the market that it had has issued 2,713,404 fully paid ordinary shares, as partial consideration for the settlement of acquisition of the Leonora Project, in accordance with shareholder approval obtained at the general meeting held on 20th May 2019.

As announced on 5th April 2019, the acquisition was to be implemented through the settlement of an asset sale agreement that was executed between the Company and the registered holders of the Tenements, being Simon Coxhell and his controlled entity, Coxsrocks Pty Ltd. The consideration to be paid for the Acquisition Agreement comprised the issue of a total of 2,713,404 shares to the Vendors (consideration shares) and a cash payment of $100,000 to the vendors. The settlement was subject to completion of due diligence by the Company and shareholder approval that has already been received.

On the same day, Blaze International had also announced to conduct a non-renounceable entitlement offer of up to 105,000,000 Options, whereby one option (exercisable at $ 0.05 on or before 31st March 2022) would be issued for every two Shares held by eligible shareholders at an issue price of $ 0.001. The details of the same are laid out in the prospectus released on 21st May 2019.

Blaze International also recently declared on 5th May 2019, the appointment of Mr. Simon Coxhell as a director of the board of the company. As part of the compensation for his appointment, the board had resolved to issue 10,000,000 New Options to Mr. Coxhell.

Mr. Coxhell is a geologist with prior 30 years of extensive experience encompassing all aspects of the resource sector including exploration, resource development, metallurgical considerations and mining.

The funds raised from the issue of New Options will be used towards the exploration of the Company’s Kirkalocka Project and its proposed Leonora Project.

The Leonora Gold Project is located near the Leonora Laverton tectonic zone of the Eastern Goldfields of Western Australia. It encompasses six tenements covering ~ 2,365 hectares and are all located within a 30-kilometre radius of the multi-million-ounce Leonora Gold District. 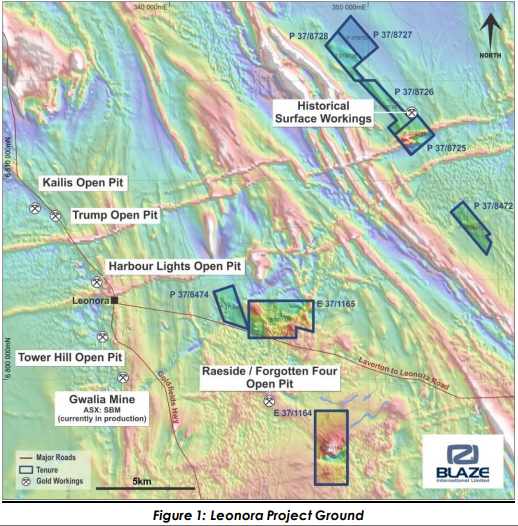