Blackham Resources Limited (ASX:BLK) is a gold mining company based in Perth. It owns 100% of the Matilda-Wiluna Gold operation located in the Northern Goldfields of Western Australia. The company began production in October 2016 and ever since has produced approximately 110,000 ounces of gold. The gold production in the 2017/2018 financial year was 70,565 ounces.

On 15th May 2019, the company announced optimistic results of the drilling at the high-grade, free milling Golden Age orebody along with the Gap Pit nearby. This is located close to Blackham’s 1.8Mtpa Wiluna Gold Plan. With the drill completion and receipt of assays, the company is currently updating and optimising the resource estimates and mining studies. 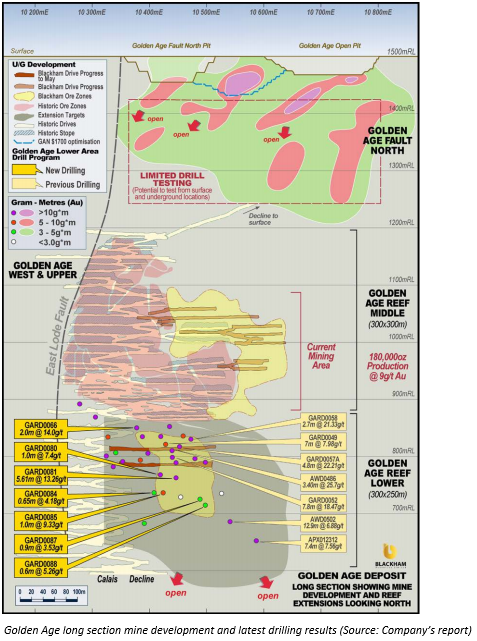 The report stated that the production at Golden Age increased to 1,490oz in the month of April, compared to 1,966oz during the entire March quarter. A further increase is expected with the commencement of Golden Age Lower (GAL) stoping in June. The Underground development at GAL had intersected high-grade mineralisation which is inclusive of recent face grades up to 94.9g/t and averages of 12.8g/t.

Below is the new drilling update provided by the company: 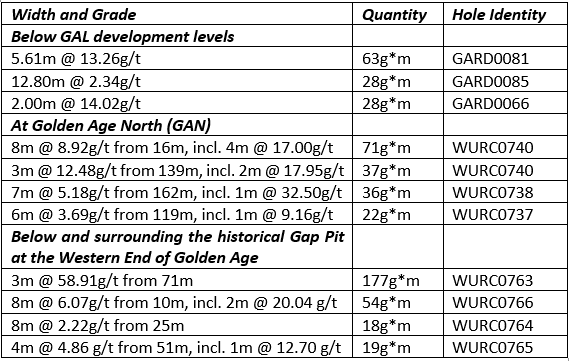 Development continues at the GAL (800m and 825m RL drives) which is the company’s highest-grade ore source. It has been extended over the last 2 years and has maintained a rolling mine life of 6 months at the least. High-grade mineralisation has been intercepted as expected. An update is expected in May regarding the 800m RL drive, which is expected to be in the ore. The report states that if the GAL and GAN are mined simultaneously, there will be significant increase in the volume of high-grade ounces delivery to the plant. The company’s strategy is expansion of GAL’s resource and mining rate above historical production (700-1000 ounces/month).

Besides this, the shallow Gap Pit was mined in the 1990s and was subsequently back filled. The latest drilling concluded the identification of free milling cross-cutting quartz reef structures. A detailed review is scheduled in the second half of 2019.