It is a chain of blocks made up of a digital piece of information whose goal is to allow digital information to be recorded and distributed, but not edited. The blocks store information about transactions such as dollar amount, date and time, along with the entities participating in the transactions. It also stores information, which separates it from the other blocks with the help of a unique code called “Hash”.

A block is added to the blockchain after the data is stored in it. The process comprises the following steps:

Subsequent to the addition of a new block into the blockchain, it becomes publicly available for everyone to see.

Blocks are stored linearly and chronologically, which is the main reason they are added at the end of the blockchain. Following the addition of the block to the blockchain, it is very hard to go back and modify the contents of the block, as each block contains its own hash code, along with the hash code of the preceding block. These hash codes are then turned into digital information into a string of letters and numbers by an algorithm. Here a hacker/offender, in order to change a single block, has to change every solitary block succeeding it on the blockchain. Altering all those hash codes would require an enormous amount of time and computing power. Hence, it can be said that once a block is added to the blockchain, it becomes extremely difficult to edit and delete it.

Bitcoin has been referred to as a new electronic peer-to-peer cash system with no trusted third party by its creator, Satoshi Nakamoto. As per the Bitcoin computing process, the computer on the Bitcoin network races to verify the transaction, following the payment for goods/services using the digital currency. To perform this, users execute a program on their computer system and resolve an intricate mathematical problem, which is called “Hash”. Following the solution to the problem by “Hashing” a block, the algorithm will validate the block’s transactions. This transaction is stored in a block on the blockchain, where it is difficult to make any alterations. In the case of Bitcoin, a computer system that successfully validates blocks, are rewarded with cryptocurrency, which is also referred to as the Bitcoin Mining.

Recently, Bitcoin crossed US$11,000 mark, which is great news for the investors who are directly or indirectly involved in the cryptocurrency market. Bitcoin reached its all-time high at US$19,891 on December 17, 2017, and then fell to US$3,216.1 on December 15, 2018. On June 22, 2019, the digital cryptocurrency crossed US$10,000 mark and is currently trading at ~US$11,300. The major reason can be attributed to the interest in cryptocurrency projects by unicorns such as Facebook, which introduced its own cryptocurrency “Libra”, which has created a positive sentiment among the investors in the crypto market. Given the huge volatility in the bitcoin (most traded over the cryptocurrency market in terms of market share), trading community was attracted to make quick bucks, which also happened in the year 2017, where bitcoin surged above 1800% in the span of 12 months from January 2017 (US$1000) to December 2017 (US$19,891).

One important stock with operations in the blockchain technology is DigitalX Limited (ASX: DCC). Let’s see how the company is performing based on its recent updates.

DigitalX Limited (ASX: DCC) has an engagement in token advisory, blockchain consulting, funds under management and media. In its token advisory, the Initial Coin Offering (ICO) funding slowed considerably during the second half (H2) of the calendar year (CY)2018. It reflected the short-term sentiment among the investors within the cryptocurrency market. Moreover, the company has been working diligently on shaping its offerings towards the evolving Security Token Offering (STO) market. It is delighted to see the market maturing with high profile Security Token Offering exchanges such as tZero and OpenFinance, which are now coming online to provide secondary trading of Security Token Offering over the calendar year 2019.

DCC continued to provide the initial coin offering advisory services in the period to several clients that were mandated prior to the second half of the calendar year 2018. The Initial Coin Offering (ICO) funding ways were appropriate for several firms to fund present technologies, and in some other circumstances, funding ways could have been better aligned to the interests of issuers and funders. DCC is under discussion with some companies offering ICO (including DCC’s clients) to convert tokens to equity and in some circumstances, include STOs, to better align incentives of all parties.

In Blockchain consulting, the company delivered several consulting services proposals during the half year period. It has also provided smart contracting services to the companies. Other than this, due to a rebranding of Futuredge Capital and difficulties in obtaining banking services for its platform, the progress of its FutureICO platform has been slower than anticipated.

On the asset management front, DigitalX operates as an unlisted fund in the Australian region, which provides a high net worth (HNI) and institutional investors exposure to the top cryptocurrencies. The company has established its presence in Panama and Malta, and also ramped up its efforts in the global markets during the first half of the year. Additionally, the company is working in tandem with the important partners in the United States of America to expand and gain market share.

In the media and education segment, its brand Coincast Media, which includes assets such as Coin.org, Coincast News and Coincast TV, provides marketing services to global blockchain businesses. The company is in discussion with an important broadcaster to launch its 2nd season of Coincast TV in the early period of 2019. 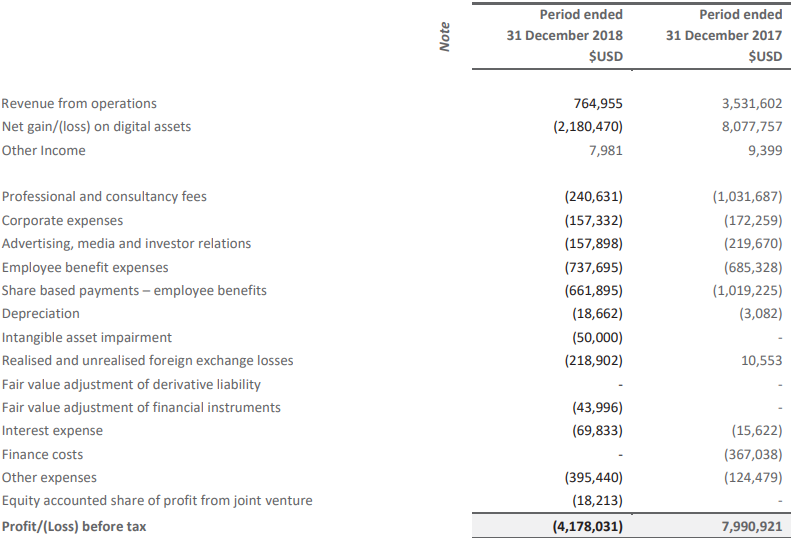 On May 15, 2019, DCC announced its capital raise from SPP and Top Up Placement.