The company has one marketed product, which provides proof of concept for its Oral Immune Technology Platform âTravelanÂ®â which is used for the prevention of travellersâ diarrhoea. Presently, TravelanÂ® is marketed in Australia, USA and Canada.

There are two other clinical assets of the company apart from TravelanÂ®: 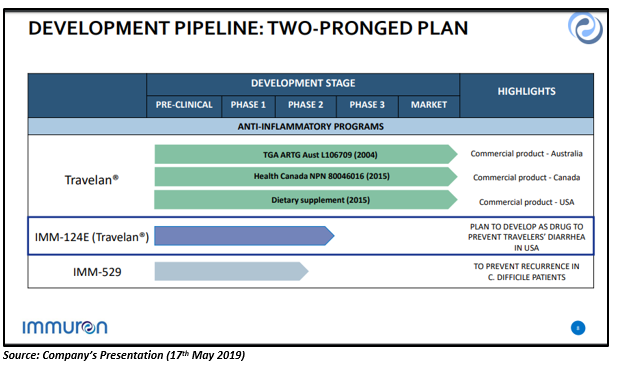 The company released a corporate presentation today on âTargeting Infectious Diseases With Oral Immunotherapiesâ. It was presented by the Chief Executive Officer of the company, Dr Gary Jacob.

Some of the segments discussed in the presentation are highlighted below:

The company had collaborated with the following Institutes for the development of a Shigella-specific therapeutic: 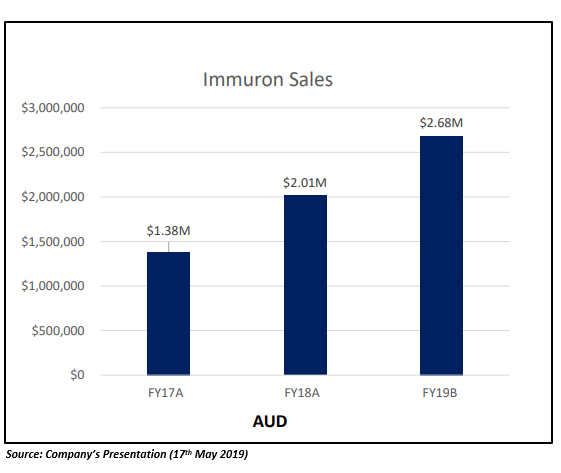 The company plans to revamp TravelanÂ® for FDA approval to develop it as a drug to prevent Travelersâ Diarrhea in travellers. The process of the drug development plan is represented below: 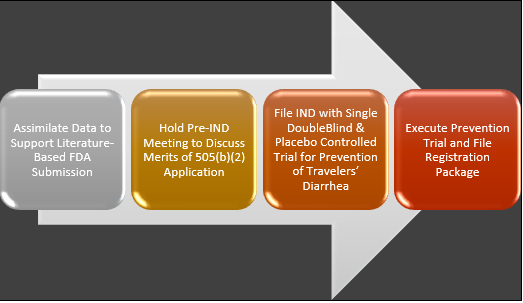 On 11th April 2019, the company announced its plans to pursue clinical development of IMM-124E as a drug to prevent Travelersâ Diarrhea (TD).

The present therapies to treat C. difficile infection are plagued by significant CDI recurrences underscoring the need for new treatments.

The company intends to develop IMM-529 as a drug to prevent recurrent Clostridium difficile Infection. The drug development plan would be implemented as per the following steps:

The company released its third quarter FY19 sales results on 15th April 2019. The company witnessed a 66 per cent YoY growth in worldwide sales during the third quarter of FY19. The sales of the TravelanÂ® surged in Australia in Q3, growing 73% YoY. The company also received its first purchase order for Canada during Q3 FY19.

The companyâs stock closed the dayâs trade at AUD 0.185 (on 17th May 2019). The stock has not performed well during the last few months. It has performed in the negative territory in the previous one month, generating a negative return of 22.92 per cent.