Santos Limited has reported a proposed acquisition of natural gas assets in Northern Australia. According to ASX release, the US-based energy major, ConocoPhillips is named as the seller of the operating interests in the assets that include Darwin LNG, Bayu-Undan, Barossa & Poseidon.

The transaction is valued at USD 1.39 billion and USD 75 million, which is dependent on the final investment decision made for Barossa. Darwin LNG has a gross LNG capacity of 3.7 mtpa, Bayu-Undan production has gross gas production capacity of 600 mmscf/d, and Barossa development has a gross 2C resource of 799 mmboe.

The company’s goal remains to emerge as a major domestic gas supplier while pursuing domestic gas opportunities within the Northern Territory as mentioned by Mr Kevin Gallagher – CEO & MD of Santos.

Among the assets, Barossa Project is the prime candidate to backfill Darwin LNG, and progress is being made towards a final investment decision by early period in the next year. Subsea wells are being used to develop the project connected to floating production storage and offloading for condensate export and gas processing.

According to the release, the transportation to Darwin LNG would be carried by the Bayu-Undan pipeline, and the 260-km gas export pipeline would supply gas to the current Bayu-Undan pipeline. Some of the milestones achieved at the project includes a subsea production system contract, gas pipeline contract, and exclusive negotiations for backfill gas supply at the Darwin LNG.

First LNG is expected in 2024 from the project, and the development capital expenditure to first gas is presently anticipated to be approx. USD 4.75 billion (2019 real). The company expects that the project would increase the operating life of Darwin LNG by more than 20 years.

Besides, the company expects to incur capital expenditure of ~USD 600 million (2019 real) for extending life. It would be deployed between Bayu-Undan end of field life and the start of the production at Barossa.

Reportedly, the transaction is in line with the company’s growth strategy to build on the current infrastructure position in the core assets owned by the company. It allows the company to have an operating interest in the assets that have long life are at low cost.

Concurrently, it provides the operatorship to the company in an LNG hub that is strategically located, having development possibilities, along the long term prospects to monetise the company’s assets in the area. 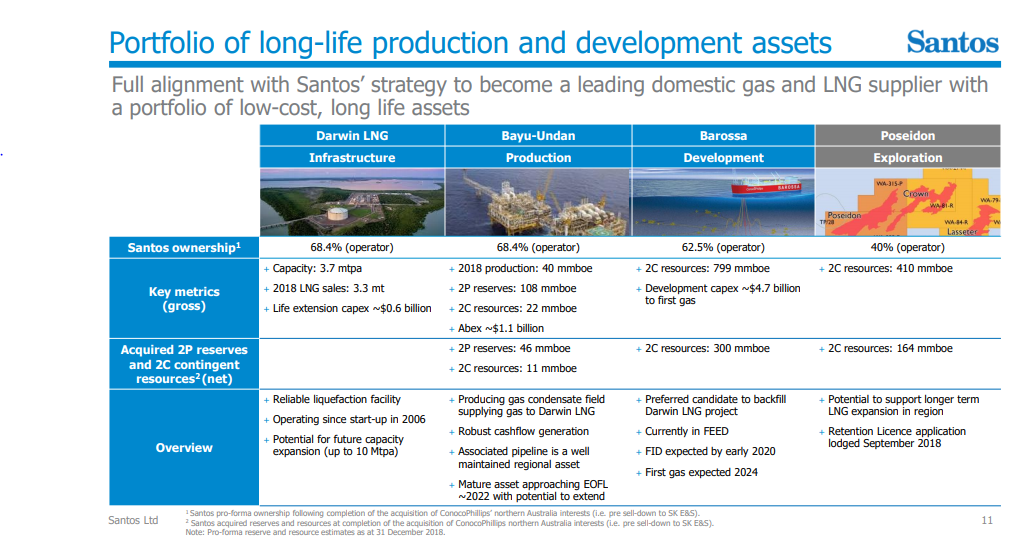 The transaction stems the company’s operating, development expertise and capabilities in offshore to propel growth in the Northern & Western Australia. The company also believes that the transaction would create value for the shareholders in the long term as well as in the short term. The company is targeting pre-tax material synergies of USD 50-75 million per annum from the transaction.

Reportedly, the total consideration of USD 1.465 billion, including an upfront payment of USD 1.39 billion and USD 75 million is dependent on the final investment decision on Barossa. The transaction has an effective date of 1 January 2019.

It is also believed that the company would benefit from the cash flows generated by the assets involved in the transaction from the effective date along with customary adjustments. More importantly, the transaction is subject to third-party consents and regulatory approvals.

As per the release, SK E&S is a substantial holder in Barossa project with a stake of 37.5%, and it has supported the transaction. Besides, a letter of intent has been signed by the company with SK E&S concerning with SK E&S acquiring a 25% interest in Bayu-Undan & Darwin LNG.

The company’s existing cash resources are set to be utilised for the net funding requirement, and USD 750 million in the new committed two-year acquisition of debt. It is also anticipating refinancing the debt used in the transaction after the completion of the acquisition, and USD 1.2 billion in cash on hand was with the company as at 30 June 2019.

The company’s priority remains to achieve a robust financial project consistent with a credit rating of investment grade. By the end of 2020, it is expected that net gearing would come down to ~30%.

A strong financial profile would be supported by the strong free cash flow along with the possible sell-downs in Barossa & Darwin LNG, and the company intends to maintain liquidity in excess of USD 2 billion. In addition, the company’s large asset portfolio could be optimised through farm-outs and disposals to reduce gearing.