Beacon Minerals Limited (ASX: BCN) was established in 2006 and has its headquarters in West Leederville, Australia. The company is involved in the development and exploration of mineral properties in Western Australia.

Insights on the Rights Issue

The Entitlement issue resulted in an application of a total of 294,706,704 shares with a shortfall of 124,085,553 shares, which shall be covered in the coming days as per the Underwriting Agreement. The issue has been underwritten by Patersons Securities Limited with Graham McGarry and Geoffrey Greenhill (Directors of the company) being the sub-underwriters.

The Shareholders, Management and Director tremendously supported the Rights Issue and closed the same on 24th May 2019. 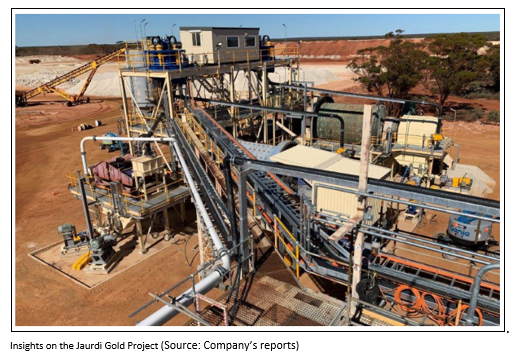 Beacon Minerals is planning to commission the plant operations at its 100% owned Jaurdi Gold Project in the month of June 2019. The power to the mill is anticipated to be connected on 20 June 2019, followed by sequential commissioning of other facets of the plant. The progress made on the plant is remarkable and will be a significant milestone for Beacon. Along with the commissioning activities being conducted, the plant operations and maintenance teams are being arranged as per the adopted Owner Operator model.

To test extensions of the existing resource, the company is planning an exploration drilling on Jaurdi tenements post commissioning. It has planned for around 250-300 holes in a range of 15,000 to 20,000 meters, initially in three areas, which lie close to the reserves and resources known to the company. Later on, the company will look at areas away from the Lost Dog mine site to test additional targets developed by Beacon’s personnel.

Three key targets areas are explained as below:

Proximal to Lost Dog Gold Mine

The far eastern parts of the Lost Dog system, entirely open to the east and northeast, is the primary target area. The western parts of the system form the second target area, which lies to the west and south of Cammi’s Creek test pit. The degree of gold mineralisation in the space has been improperly defined by historical drilling. Both the above areas are a clear target of the company, which have not been closed yet.

The company has drilling plans in some test parts of the space considering the possibility of 3 km of palaeochannel strike between Black Cat and Lost Dog. The mapping of the area is still incomplete, and the above estimates are a result of previously completed drilling.

East and Northeast of Lost Dog

Beacon is also planning some aircore drill traverses to check the palaeochannel system to the east of Lost Dog as similar settings in the area, specifically E16/469 and E15/1582 within Beacon controlled tenements, have been identified.