A phosphate rock mining company of Australia, Avenira Limited (ASX: AEV) aims to develop a portfolio of agricultural minerals and production assets that will enable the supply of agricultural nutrients to the world critical to global food security. The 80 per cent owned Baobab Phosphate Project based in Senegal (West Africa) is the company’s primary asset. 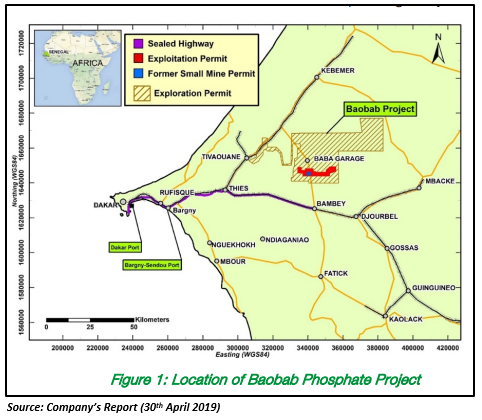 The company notified in an announcement today that its 80 per cent subsidiary Baobab Mining and Chemicals Corporation (BMCC) has executed the announced loan agreements with the company’s three major shareholders Tablo Corporation, Agrifos Partners LLC and Agrifields DMCC. The first tranche of funds is being drawn down immediately. ~ A$1.0M is the aggregate funding amount to be made available to BMCC under the Shareholder Loans, with the maturity of 30 September 2019 (or as per parties’ extension) and 10% annual interest.

On 18th March 2019, Avenira Limited announced the key outcomes from the 1 Mtpa High-Grade Phosphate Rock Concentrate Project Feasibility Study at its Baobab Phosphate Project. The company provided the funding plan to fully engineer and implement the project. The company estimated its funding needs at approximately AUD 11 million to AUD 14 million.

Following the announcement of the funding plan, the company released a funding update on 14th May 2019. Avenira notified that the BMCC is in the process of arranging unsecured loans (‘Shareholder Loans’) with the company’s three major shareholders. Targeting the Final Investment Decision (FID) during the first half of 2020, the company decided to continue the progress of fundraising discussions with potential financing partners. The aggregate funding amount was US$0.7 million that was to be made available to BMCC under the unsecured loans.

The company announced its Quarterly Activities and Quarterly Cash Flow Report on 30th April 2019. The results of the Feasibility Study of 1 Mtpa High-Grade Phosphate Rock Concentrate Project were reported during the quarter. The study revealed that it is a technically sound and financially robust project. It will deliver a post-tax unlevered NPV of US$212 million and IRR of 25.5 per cent over a 13.4-year mine life, based just on the Project’s Indicated Mineral Resource. The company had a cash balance of $1.3 million at the end of the quarter.

Avenira provided an update on JDCPhosphate in which it owns a 7% interest on 9th April 2019. The company reported that JDCPhosphate (US-based) will commercialise its proprietary technology and will be renamed to Novaphos Inc.

The securities of Avenira were placed under the trading halt on 10th May 2019, pending it releasing the funding announcement.

Since the beginning of May 2019, the stock has traded in the negative territory. Avenira’s stock generated a negative YTD return of 23.53 per cent.