VRX Silica Limited (ASX: VRX) is an Australian-headquartered mining and exploration company with core activities centred on tapping the global shortage of silica sand. The Asia-Pacific region, where the substantial shortage of silica sand has been identified, provides a unique opportunity to VRX Silica. The companyâs significant silica sand projects - Arrowsmith, Muchea and Boyatup Projects â are located in Western Australia as the state is well positioned to fulfil the dwindling supply of the product in the Asia-Pacific region.

Recently, VRX Silica has released its Quarterly Activities and Cashflow report for the quarter ending 30th June 2019. Let us have a look at the activities undertaken by the company during the quarter:

In June 2019, VRX Silica released the results of the aircore drill program for the Muchea Silica Sand Project, that was undertaken by the company during the March quarter. Following the receipt of assay results, a new Mineral Resource Estimate or MRE was determined by the company.

The company reported a maiden MRE for the project earlier on 20th November 2018, following which a close spaced aircore drill program was conducted. According to VRX Silica, the previous MRE did not define all the material that could be modified to beneficiation to produce foundry and glass grade silica sand. Low iron sand layers which were earlier discounted due to colour were investigated under the drill program, along with the higher levels of clay and organic matter â characterized as Al2O3 and LOI1000C - in the assay dataset.

It is expected that the subsequent testwork centred on the currently discounted sand layers might lead to additional upgrades and reinterpretation to the Muchea Mineral Resource Estimate. A more comprehensive PoW has also been filed to undertake aircore drilling activities at the areas that were hand augered in the past.

The drilling activity is likely to be conducted in September 2019 quarter.

During the June 2019 quarter, VRX Silica released a process circuit design for a processing plant, along with engineering and cost estimate. The estimates were provided by CDE Global and were based on the testwork results. Optimistic over the process circuit design, the company is now confident that the final silica sand products will be capable of production. The company has compiled the following recovered products into its products catalogue: 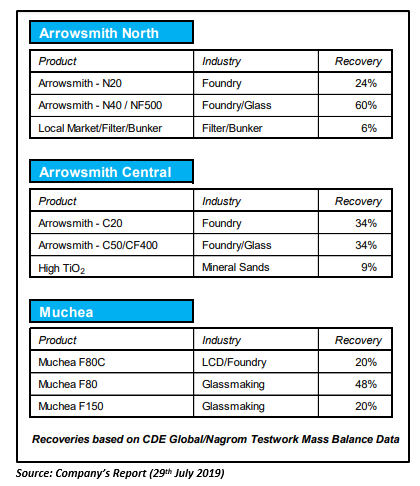 VRX Silica notified that these recoveries are of products which will meet the requirements of the potential offtake customers that had shown interest in silica sand products to-date from the companyâs projects.

In April this year, twenty manufacturers including purchasing agents, across the Asia-Pacific region had shown interest for the companyâs silica sand products from Arrowsmith and Muchea Projects. As per the company, the enquiries of interest were received following the appointment of its International Sales Manager, Mr Yoonil Kim, in November 2018. South Korean national, Mr Kim, holds over 15 years of experience in selling and marketing of silica sand products across the Asia-Pacific area to foundries and glass manufacturers.

Take a look at the table below that shows the number of enquiries received for foundry and glassmaking industries from various regions: 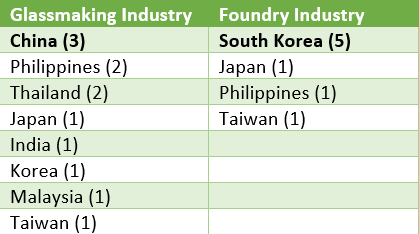 VRX Silica will be able to engage in binding offtake agreements with these manufacturers post receiving approval of Mining Permits at its silica sand projects. Although all these enquiries might not result in binding contracts, the company is hopeful of securing enough offtake to support its silica sand projects development activities. VRX Silica is looking forward to receiving further enquiries, and sign binding offtake agreements with these manufacturers prior to any commitment of funding arrangements for processing plants.

VRX Silica mentioned that the strategic alliance supports its evaluation of improving dwindling supply of silica sand in the Asia-Pacific area.

On 9th July 2019, VRX Silica also released the results of the aircore drill program that was undertaken at the Arrowsmith North Silica Sand Project during the last quarter. The company determined a new Mineral Resource Estimate for the project following the receipt of assay results.

The company is hopeful that most of the Indicated Mineral Resource will be converted into Probable Reserves with the mineral resource being primarily within the Mining Lease application area. The new MRE will help it finalise Ore Reserves estimates that will be useful in the approaching BFS. VRX Silica will conduct a further testwork program on the white sand and complete the process of Environmental Approvals and Mining Lease Applications at its both Arrowsmith Silica Sand Projects (North and Central).

VRX Silica received commitments for raising capital of ~$2.26 million (37.67 million shares at an issue price of $0.06 cents issued) before costs in April 2019, via a share placement to sophisticated and professional investors, along with current shareholders. The company informed that the funds raised through the Placement had been allocated to finalise the feasibility studies and process of Environmental Approvals and Mining Lease Applications at its Muchea and Arrowsmith Projects. The company intended to use a part of the net Placement proceeds for the exploration activities at Warrawanda HPQ and Boyatup Projects, and for general working capital purposes.

VRX Silica spent AUD 576k for exploration and evaluation payments during the quarter and has estimated a further expenditure of AUD 250k on these payments in the next quarter. The cash balance of the company at the end of the June 2019 quarter stood at ~AUD 1.54 million.