Australia witnessed lower grains output due to the drought conditions, and coupled with weaker demand in the international market, amid the ongoing trade tensions, impacted the profitability of the ASX-listed agribusiness player- GrainCorp Limited (ASX: GNC).

The FY19 earnings of the company were adversely affected by one of the worst droughts on record in eastern Australia. The underlying net loss after tax of the company stood at $82 million, which was significantly down against FY18 net profit after tax of $71 million.

The financial metrics remained substantially weak in FY19 as compared to the previous financial year, and remained as below:

The malt segment of the company performed relatively well as compared to the other segments, as the demand for malt remained solid during the year with high capacity utilisation and improved operational efficiency.

GCN witnessed large skew in earnings in the second half, which further reflected higher beer consumption in the northern hemisphere in the summer months and lower ECA barely supply.

The company witnessed a strong growth in malt sales during the second half of the year 2019 and progressed across its malt capacity expansion projects in Scotland. The expansion included an upgrade of Bairds Malt’s Arbroath facility and construction of a new malting plant at Inverness, which would further increase the Bairds’ total annual capacity to over 300,000 tonnes.

GrainCorp announced a demerger of the malt business in April to unlock significant value for the shareholders of the company by creating two high-quality ASX-listed agribusiness companies.

The grains segment of the company was adversely impacted by the drought conditions in Australia and global trade dispute. The east coast Australian (or ECA) grain production of five core grains (including both winter and summer) stood at 7.7 mmt in FY19, down by almost 54 per cent against the previous year production of 16.7 mmt.

GNC managed to sell 7.1 mmt of grains during the year, which remained slightly higher against the previous year; however, the grains receivals stood 54.42 per cent lower in FY19 against FY18.

The port supply chains were reversed by the company amid the shortage in production of grains in Australia, which reduced the exports by 88.89 per cent in FY19 against FY18. 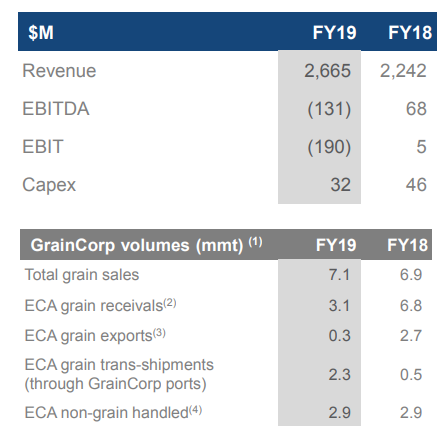 The company forecasts that the winter crop would remain significantly below the average in eastern Australia, and GNC further anticipates the production to remain below average in both Western Australia and South Australia.

GNC anticipates high capacity utilisation of malt plants in FY20 and solid demand for base and speciality malts, and other craft and distilling products. The company is expected to benefit from efficient warehousing and the distribution networks and would also expand more on distribution network to support fulfillment into more countries in FY20.

The new rail contacts would be effective from FY20, and the company anticipates that it would provide flexibility to align with grain volumes with minimal take-or-pay requirement.

GNC entered a 10-year crop production contract, which would be effective from FY20, to manage the risk associated with the volatility of eastern Australian winter grain production. The company also entered a contract that would help in smoothing the cash flow, which would further allow for longer-term capital allocation and business planning through the cycle.

The contract entered by the company comprises a production payment threshold, which would allow it to receive a payment when annual grain production drops below a certain threshold; however, above the threshold, GNC would be liable to pay.

On 14 November 2019, post the announcement and investor briefing, the stock witnessed a large buying interest with spiked volumes, and the prices rose to settle over 4 per cent higher against the previous close on ASX.

GNC delivered a negative return of 14 on a YTD basis; however, the stock managed to deliver a positive return of 2.79 per cent over the last five days (returns as on 14 November 2019 prices).