Australia is the worldâs driest inhabited continent, and water scarcity is a persistent issue in Australia amid dry and variable climate. The agriculture production in Australia is not just limited by suitable fertile land but also by the availability of irrigational water.

Water is a valuable commodity amid its vast usage in agriculture, industrial, and many other sectors of an economy, which makes investing in the water a well-established trend in Australia, where water rights are considered as separate property rights.

Water entitlements are rights upon a portion of water in the underlying reserve such as a river, storage, or underground aquifer. 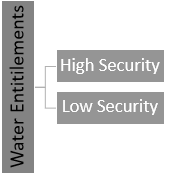 Water allocations are typically independent tradable rights to access a volume of water, issued under water entitlement rights in a given water year, and the water allocation rights vary from year to year depending upon factors such as storage levels, climate conditions, recharge status of an aquifer, etc.

The investment opportunities in the Australian water market circulates around acquiring the water entitlements and leasing or selling the corresponding water allocations rights to generate high returns.

How is Efficient Distribution Ensured?

In Australia, the allocation of water entitlements is capped and depend upon the available volume in reserve, which generally does not suffice for all the irrigational needs amid water scarcity in Australia.

Now, the irrigators, with high capacity to pay for the water-supported by selling the crop at high prices, could pay for the allocated water by high crop gross margin per unit of water or through any other means. Such irrigators could outbid other irrigators for water allocations, which in a cascade ensure allocation of water to the highest contributor to the system.

In Australia, the water entitlements vary according to their geographical regions; however, the Murray-Darling Basin encapsulate about 90 per cent of the trade and is responsible for about 65 per cent of Australiaâs irrigated farmland, and approx. 40 per cent of the gross value of agricultural production in Australia. 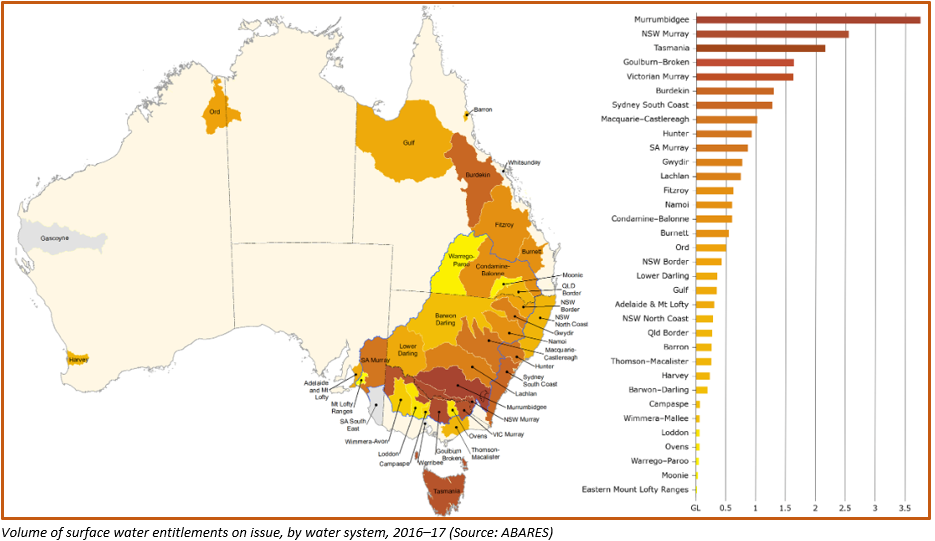 The entitlement on the issue from the Murray-Darling basis is as below:

The number of entitlements in the Murray-Darling Basin is witnessing a surge from 2014, while the volume of entitlements being steady around the average level of 19.6 gigalitres, which in turn, is self-evident to justify the increasing interest for water entitlements in Australia.

The Australian water market witnessed low opening allocations at the beginning of the allocation period from 2019-20 amid drought conditions, which led to significantly lower storage volumes. However, water availability in 2019-20 was supported by the reserve carryover of approx. 31 per cent of 2018-19 supply, which represented 1,600 gigalitres.

The ABARES anticipates that about 3,442 gigalitres of water would be available for irrigation use in the dry case scenario by the end of 2019-20 across the southern Murray-Darling Basin, which further includes the carryover and excludes the environmental water.

The forecast by the ABARES underpins a decline of 25 per cent against the available water in 2018-19; however, better as compared to the average availability of 2,590 gigalitres during the worst of the Millennium drought between 2007-09

The ABARES also anticipates the water allocations to increase as high as 6,112 gigalitres at the end of 2019-20 under the average and wet conditions at the southern Murray-Darling Basin.

Allocation Prices are Forecasted to Surge

The water allocation prices shift drastically down in case of average or wet scenarios to $332 per megalitre and $258 per megalitre for 2019-20.

The ABRRES forecasted the water allocation at the Southern Murray-Darling Basin for four cases, i.e., dry, extreme dry, average, and wet for the period of 2019-20 as below:

The ownership of water entitlements in Australia is heavily distributed among the Commonwealth and the private farmland owners. For now, the non-landholding water investors in Australia are limited; however, the numbers are slowly witnessing a growth as evident above, which further justifys the term âEmergingâ in the title of the article.

With the inclusion of emergence being addressed, now let us take a look over another word âAlternative Assetâ.

Water investors play a vital role in the Australian water markets by providing an alternative capital source to the irrigators and by also providing liquidity in the water market.

Water- as an alternative asset class could be named so amid its non-dependency on factors commonly related to traditional assets such as exchange rate, stock market performance, etc. The factors which generally drive the water prices include climate conditions, storage levels, irrigated commodity prices, etc.

The growth in agricultural productivity along with the efficiency in an economy to store the rainwater are among many other factors which impact water prices over the long-run.

The market operators and stakeholders of the water markets in Australia are adopting various measures to manage many challenges, and the water market remains a whole new play for the investors, growth of which would depend upon the relative interest of the global market to diversify their portfolio in the trend of fishing for the alternative investments.