AusNet Services Limited (ASX: AST) is a utility sector company with registered office in Australia. The company is engaged in electricity transmission and gas distribution. The company was officially listed on ASX on 14th Dec 2005.

AusNet Services released full-year results for FY2019, declaring a final dividend of 4.86 cps, an increase of 5% and franked to 45% (FY19 franking 42.5%, 0% franked in FY18). The company stated that its full year results have been affected negatively by the reduced regulated revenues such as previously received metering revenues, a decrease of 9.4% in gas tariffs and lower reliability incentive revenue. The company also highlighted that the second half was positively influenced by the price resetting in both distribution businesses on 1st Jan 2019.

The lower revenues were offset by the cost-efficiency program. As a result, the company witnessed an EBITDA decline of 0.8%, while revenues declined 2.5%. AST also pointed about the negative impact of increased depreciation consistent with growth in asset base and increased finance cost, which has resulted in hedging adjustments and discounting changes in accordance with the provisions. 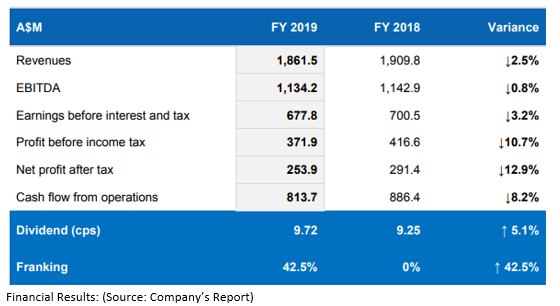 The company also reported the increase in transmission revenues, which reflects a number of significant customer-initiated replacement and relocation projects. AST communicated that they have witnessed an increase in total transmission expenses of $5.7 million related to FY2018. The company incurred an additional cost of $2.5 million and $3.2 million for a rise in new transmission connections for renewable generation and to implement several cost-saving initiatives. The company also pointed an increase in CapEx of $33.2 million for wind farming connection interface works and a rise in excluded projects. The operating expenses of the company experienced a decline of $13.5 million, due to the cost efficiency program with updated contractual arrangements in vegetation management and corporate support functions in lieu of reducing their costs.

AST management is expecting to pay a total dividend of 10.2cps, up 5% on FY19 and franking of 40% to 50% in accordance with the business conditions. The company will continue to identify future dividend by considering operating cash flow post servicing all its maintenance CapEx as well as a portion of its growth capital expenditure. The company expects to see a rise in the asset base of approx. 3% per annum till FY22. AST is also positive about the contracted energy infrastructure assets, as it has increased its target from $1.0 billion to $1.5 billion by FY2024. AusNet intends to keep its net regulated debt and contacted asset base below 70% to FY2022. Additionally, the company is also looking forward to continuing its focus on productivity and efficiency, aiming top quartile of efficiency benchmarks for all the networks.