Leading Australian energy infrastructure business APA Group (ASX: APA) has announced the appointment of Mr. Rob Wheals as the new Chief Executive Officer and Managing Director of APA Group. As per the company’s announcement, Mr. Rob’s appointment will take effect on 6 July 2019. Rob Wheals will be getting a total Fixed Remuneration (TFR) of $1,600,000 per annum (inclusive of superannuation.

As part of his appointment, Mr. Wheals will be subject to a minimum securityholding requirement whereby he must build his security holding in APA Group to be equivalent to 100% of his TFR.

In the first half of FY19, the company’s total revenue increased by $58.2 million or 6.1% to $1,012.9 million as compared to the previous corresponding period (pcp). Further, the company reported net profit after income tax of $157.4 million for the half year period, an increase of 27.0% or $33.4 million on the pcp. The company’s EBITDA increased by 4.3% or $32.4 million to $787.7 million in H1 FY19 while its net interest and other finance costs paid decreased by 8.8% during the period. The company’s Operating cash flow was $470.2 million for the six-month period, an increase of 1.7% or $7.7 million on pcp, driven by an increase in receipts from customers and a reduction in interest cost offset by an increase in cash tax paid during the period.

The company is having a unique footprint & solid foundations throughout Australia. 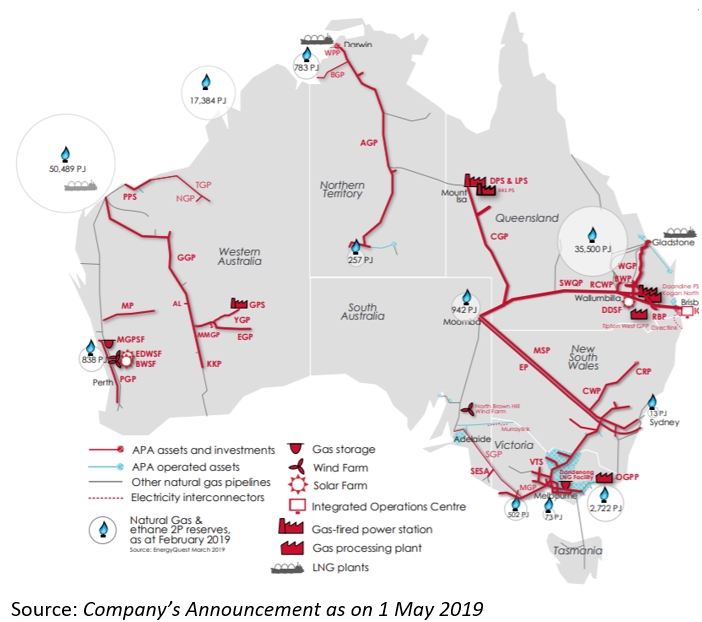 Energy is an essential service and delivering it in accordance with community expectations is what the whole energy industry needs to do every day. APA plays an essential part in Australia’s energy supply chain, as does each and every producer, generator, pipeline and network operator and retailer.

APA services a range of customers in Western Australia within the resources, industrial and utility sectors. APA provides asset management and operational services to the majority of its energy investments and to a number of third parties and as per the company’s 2018 Annual report, its main customers are Australian Gas Networks Limited (AGN), Energy Infrastructure Investments and GDI (EII). Asset management services are provided to these customers under long-term contracts.

APA identifies risks to its business and puts in place mitigation strategies to remove or minimise the negative effect and maximise opportunities in respect of those risks. Material risks are reviewed on an ongoing basis by APA’s Executive Risk Management Committee and the Board Audit and Risk Management Committee, together with the relevant business units and both internal and where appropriate, external, experts.