Anson Rides High On Lithium Carbonate; Shares Surged Up By 47% On ASX

Anson generated the lithium carbonate, sourced from the brine at Paradox Brine Project, situated in the United States. Also, the sample of lithium carbonate was produced through ion exchange system operated using accelerated parameters to produce the eluate.

The company processed over 3,500 litres of 180mg lithium per litre concentrate through Lilac solutions to produce about 20 litres of optimal lithium chloride concentrate of approx. 18,000 mg per litre of lithium.

ASN further expects that lithium recoveries would stand more than 80 percent from brine to eluate in the in-field pilot and commercial operations, where the company intends to use the Lilac’s operating conditions.

Southwest Technologies purified the eluate produced by the Lilac Solutions through chemical treatments and soda ash carbonate to produce the battery quality lithium carbonate from the lithium chloride eluate purified by the company, with no bicarbonation.

ASN then produced the battery quality particle size, provided by the customer of the company, by washing the lithium carbonate with deionised water and micronized it using a jet mill, and to analyse the particle size distribution; the company used a Malvern Mastersizer 2000 Laser Diffraction Particle Size Analyser at the SGS Laboratories in Lakefield, Ontario.

Based upon a number of specifications reviewed by the company, it produced the particle size distribution of samples, which are as following:

As per the company, the size distribution fulfils the strict and confidential specification of the company’s customer and could be readily used for manufacturing batteries, and it would also fulfil the specifications of cathode material manufacturers.

The comparative analysis between the assay samples of the company and the specifications of the cathode material manufacturers compiled by ASN through public sources are as follows: 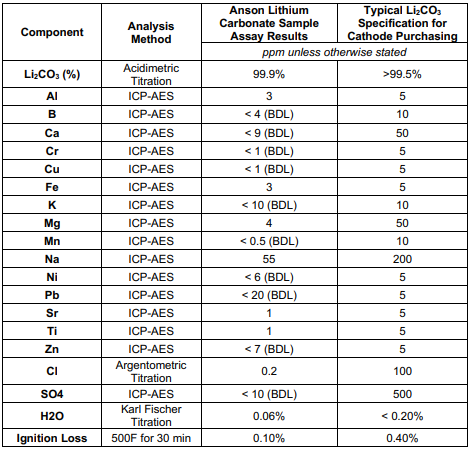 The key elements in the assay of SGS laboratories of the company’s lithium carbonate samples are below the detection limit of the ICP-AES instrument. The company mentioned that the elements which are above the detention limit do not exceed the specifications of a typical battery quality lithium carbonate.

Anson is currently adopting the outcomes from the current stage of design and engineering into the flow sheet and final designs for the off-site production of a 20-kilogram sample.

The samples would be tested further for production qualification with prospective customers of the company and for the in-filed pilot plant, which is also planned to produce a large quantity of lithium carbonate samples and would utilize industrial-scale processing equipment.