An Overview On The Two Metal Companies; PXX And FEX

PolarX Limited (ASX: PXX) is an ASX-listed metals and mining company and has a high potential Alaskan project, spreading across 241 km2 of State Mining claims. Within the 35 km mineralised belt, several large unexplored advanced targets and existing high?grade resources are contained, which are now under PolarX’s control.

An early soil sample on this 35 km belt is mineralised with Copper, Gold and Silver on almost the entire 35 km belt’s surface in various geological forms.

Under the agreement, Lundin Mining has an exclusive option to spend a total of US$24 million on the exploration activities for a period of three years and making consistent payments in cash over the period of time to PolarX, summing up to US$20 million. Pursuant to these conditions, Lundin Mining can elect to earn into the Stellar project.

The option will expire on either 31st December 2019 or 30 days after Lundin Mining has been provided with all information and data from the work program, whichever is later.

After the share placement, the company has intentions to raise additional capital up to $4.25 million via a 1 for 7 non?renounceable entitlement offer to the eligible shareholders. The offer price is same as the placement issue price at $0.08 per share.

The proceeds from the funds will be directed towards exploration on the underexplored Zackly Claims and the Caribou Dome project, apart from the working capital. 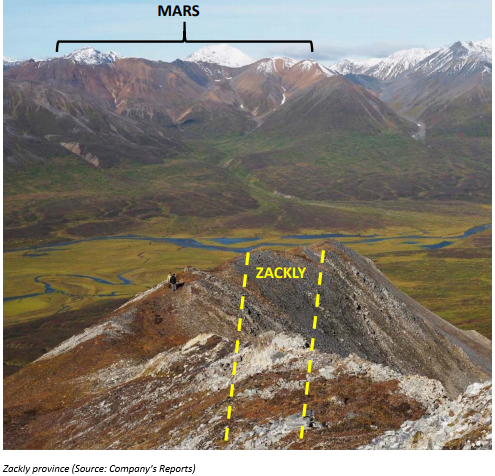 On 3rd June 2019, in another announcement, the company reported a trading halt of its listed securities on the ASX. ASX accepted the request, and the securities went on halt yesterday, the reason being a pending announcement related to a strategic investment in the company.

On the weekly chart, the stock has made a good base formation at the bottom. The base is a zone wherein the stock takes support or rests after a downfall and is generally a sign of a bullish reversal. A base formation is a very good signal for the potential reversal however, generally the stock price consolidates for a while before it makes a decisive move.

It starts to move in a sideways trend which halts the previous downtrend and generally strong hands accumulate shares in this calm environment.

Volume can never be overlooked when base formation is happening. Let’s look at the volume action with the price to get a better view.

When the stock started to fall, the volume also tapered down. This was the first indication that the selling it running out of steam. When the stock was forming the base throughout May 2019, the volume was quite stagnant, and the stock kept on moving forward with a strong support of A$0.052.

When the stock was about to break above its base, the volume also started to pick up. This volume action was another sign of an uptrend as the price was increasing with the rising volume.

As of 5th June 2019, the stock is comfortably trading above its base.

Today, the company released to the market its investor presentation. The company reported a high grade of overall resource at 64.1% Fe, the scale of 9.2Mt exceeds the company’s expectations. Furthermore the company witnessed excellent preliminary metallurgical results. 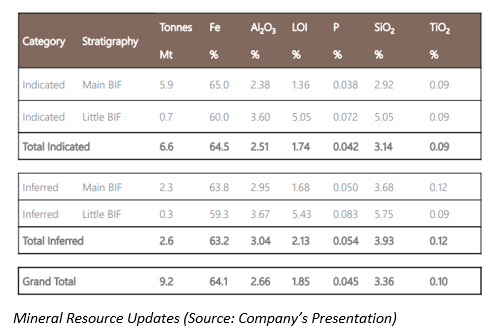 On 4th June 2019, the company updated investors that it is on the verge of commencing a combined infill and geotechnical diamond drill program at its flagship Iron Ridge project in the Mid-West region of Western Australia.

The drilling will incorporate seven holes for 880m of infill diamond drilling so that a portion of existing inferred mineral resource can be converted to Indicated category. The company expects to release the results progressively from July 2019 onwards, and Project feasibility study (PFS) is now due to be completed in October 2019. It is expected to commence further drilling of 650m for the purpose of hydrological studies.

Robert Brierley, Managing Director of the company, stated that it is an important step for the feasibility study on the development of the project. The company is also looking forward to intersecting more iron ore mineralisation as it progresses towards direct shipping production in the fastest possible time.

Post that, the stock saw one more gap up opening (on 23rd January 2019) and this time the volume was the star of the show. The volume on 23rd January picked up to a massive 157.8 million, increasing the credibility of the gap. Since then the stock price kept on rallying to higher levels, with moving average simultaneously trending up.

The second gap had probably initiated the strong force for this continued trend. Currently the stock is trading at A$0.120 and the trend is deemed to be positive until the price breaks below the moving average.