The diversification of one’s portfolio is a key requirement at the time making an investment, as it reduces the risk of capital loss as well as provides the investor an opportunity to make entry on decent assets. On 20th Aug 2019, by the closure of the trading session, the benchmark index was at 6545 points with an upside of 1.2% from the previous close.

Let’s have a look at 4 stock’s, which provides an opportunity for investors with their key updates.

Recently, the company, via a release dated 20th August 2019 announced that the government of New South Wales (NSW) has selected its CPB contractors for delivering the Nepean Hospital Redevelopment Stage 1. The company further stated that project financed by the government of New South Wales, involves construction of a new 14-storey clinical building, which would lead towards the production of revenue amounting to around $379 million to CPB Contractors. It added that the commencement of work at Nepean Hospital has been initiated, which is being anticipated to wrap up in 2021.

As per the release dated 16th Aug 2019, the company’s CPB contractors is to deliver the Campbelltown Hospital Redevelopment Stage 2 project by the New South Wales Government. The construction of the project has been started and is forecasted to wrap up by mid-2023. The project will be generating revenue to CPB contractors amounting to $424 million. Going forward, CIMIC stated that the Campbelltown Hospital Redevelopment Phase 2 is growing crucial clinical and support services as well as assimilating and increasing mental health facilities.

In another update on 14 August 2019, CPB contractors of the company has won a contract to deliver Taxiway Mike and Remote Stands Stage 2 project of Auckland Airport, which is a critical component in the facility’s major capital works program. Over the time of upcoming two years, this contract would be producing revenue amounting to NZ$221 million to CPB contractors. The scope of work under the terms of contract includes:

A Glance at First Half Performance

In the 1H FY19 period, the company reported net profit after tax amounting to $367 million with stable revenue of $7.0 billion. However, EBIT, PBT and NPAT margins stood at 8.2%, 7.2% and 5.3% respectively. The company posted operating cash flow of $1.8 billion with EBITDA cash conversion of 87% in LTM. 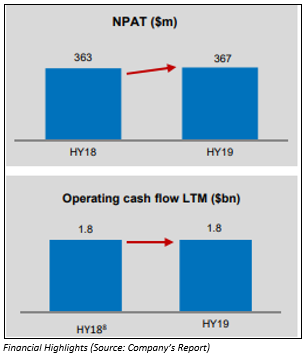 Ausdrill Limited (ASX: ASL) is in international mining services group, which provides services such as exploration, supply and logistics to the world’s leading mining companies. Recently, the company via a release dated 20th Aug 2019 announced that ASL is adopting Perenti as a new brand and identity. It added that ‘Perenti Global’ would be the trading name of the Group company as well as listed entity and would sit above the Industry Sector Groups: Surface Mining, Underground Mining and Investments. The Board of the company considers that the new name and brand Perenti better represents the ASL’s status as a diversified global mining services group and it also provides a strong platform that would underpin the Group’s strategic direction as well as future growth ambitions.

As per the Managing Director of the company, Mark Norwell, the name change was an important step in culturally binding its businesses together under a common identity. Previously, in May this year, the company’s subsidiary entity has secured an extension of a contract from Peabody.

Recently, the company through a release announced that Norges Bank has ceased to be a substantial holder in the company from 13th Aug 2019.

Issue of Shares: Recently, the company via a release dated 15th Aug 2019 notified the market that it has issued shares to Barminco vendors on the procurement of the underground hard rock mining contractor last year. The company issued 150,666,463 shares, reflecting around 22.1 % of ASL. Moving forward, it was mentioned in the release that Gresham Private Equity and its associated entities has advised ASL that, of the 61,787,133 shares in which Gresham has a relevant interest, beneficial holders of 13,741,900 shares have elected to have ASL’s shares transferred or distributed to them in-specie instead of being sold on-market to receive cash returns.

The following picture provides an overview of financial performance of the company:

Sydney Airport (ASX: SYD) is into operations of Airport, which got listed on Australian Stock Exchange in 2002. The company with the help of a release dated 20th Aug 2019 updated the market on the traffic performance for the month of July 2019, wherein it stated that it witnessed a decline of 2.2% to 1.46 million passengers in comparison to pcp and posted a decrease of 0.7% in domestic passengers on the pcp to 2.39 million. It added that around 3.85 million passengers have passed through Sydney Airport in July 2019, reflecting a fall of 1.2 % on pcp.

The company further stated that Malindo Air rolled out its inaugural Sydney flight on 15 August 2019, by starting its daily service to Kuala Lumpur via Denpasar.

A look at 1H FY19 results: As per the result presentation released on 15 August 2019 for the period ending 30 June 2019, the company stated that it has disciplined cost control. The operating expenses of the company witnessed a fall of 1.4% standing at $1.6 million in comparison to pcp. It is on track for full year decrease in operating expenses. In the 1H FY19 period, the company reported total passengers to 21.6 million with revenue amounting to $797.1 million, reflecting a rise of 3.4%. The company delivered net operating receipts and EBITDA amounting to $431.2 million and $649.2 million, reflecting a rise of 4.8% and 4.1%, respectively.

An Australian tech entity, ClearVue Technologies Limited (ASX: CPV) functions in the BPIV or Building Integrated Photovoltaic segment, which encompasses the utilisation of solar technology into the surfaces of premises.

Recently, the company with the help of a release dated 20th Aug 2019 announced that it has inked a collaboration agreement with Attefallshus AB. The objective behind the signing of collaboration agreement is to integrate the ClearVue products and technology into Attefallshus’s micro-homes. In another update, the company stated that it has signed collaboration Agreement with AquaGen. The objective behind the collaboration was integrating CPV’s technology into AquaGen’s microgrid based resilient sustainable village developments, and other projects.

Also, the company updated the market with the results for the quarter ended 30th June 2019, wherein it stated that it has wrapped up work on the Warwick Grove Shopping Centre demonstrator site. Besides, post dual listing of the company on the Frankfurt Stock Exchange, CPV had roped in Deutsche Gesellschaft fur Wertpapieranalyse Gmbh as its investor relations advisor in Europe region.

During the quarter, the company inked two agreements, one with Arup in order to develop its Smart Façade Concept and second agreement with BeyondPV of Taiwan for securing its supply chain.

From the cash flows perspective, the cash balance of the company, on 30 June 2019 stood at around A$1.4 million. It is expecting that it would be receiving an R&D tax refund in the 2H of this year. The net cash outflow from the operating activities stood at A$0.896 million after making major payments for staff costs and administration, legal and corporate costs of A$0.201 million and A$0.327 million, respectively. 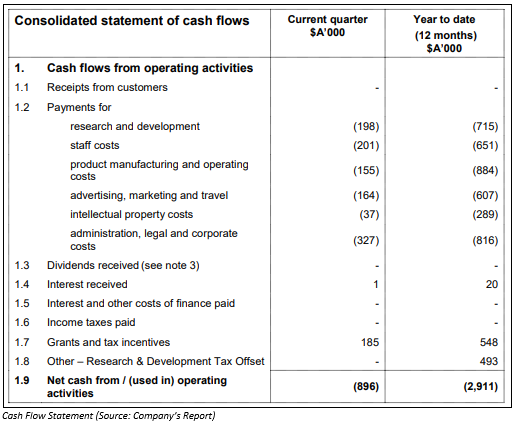 On 20th Aug 2019, the stock last traded at A$0.22 per share, down 12% compared to its relative close. ClearVue’s market capitalisation was noted at A$24.43 million. While looking at the stock’s past performance, it can be observed that it has delivered returns of -3.85% for one-month period, 25.00% during the three-months’ time- frame and -18.03% in the time span of six months.