All that investors need to know about Uranium explorer, Adavale Resources

Sydney-based Adavale Resources Limited (ASX: ADD) is engaged in the acquisition and exploration of uranium properties in Australia. The company holds three exploration licences in the highly proliferous sedimentary uranium province within the Lake Frome Embayment - EL 5893 covering 295 km2, EL 5644 of 137 km2 and EL 5892 covering 125 km2. The tenements lie to the north of the Flinders Range within a flat, semi-arid landscape in South Australia.

Located in South Australia, the area lies 70 km East of Marree and 550 km north of Adelaide. Lake Surprise comprises tenements covering ~ 2705 km2 within a flat, semi-arid landscape that lies to the north of the Flinders Range, having huge potential of surficial and sandstone style uranium mineralization.

Over the years, uranium minerals with the occurrence of strong radiometric anomalies have been discovered in the Project area. The proposed model for Lake Surprise is much like the one employed by Eromanga Uranium. The model not only considers reduction of oxidation conditions associated with uranium solubilisation and precipitation, but also involves additional physicochemical processes and the input of uranium and other chemical species from artesian springs.

Jubilee is home to 14 ore blocks that are economically viable and situated within a 2 km-long north-trending palaeochannel system. These blocks contain equivalent uranium (eU3O8) concentrations of more than 100 parts per million (ppm), with a maximum range of 611 ppm and thicknesses greater than 0.5 metres.

The palaeochannel, open in multiple directions, has further tributaries and segments that are untouched and undrilled.

Adavale Resources had produced a preliminary assessment for this prospect to quantify the uranium present from a study that involved analyses of gamma-ray logs of drill-holes and estimated the presence of eU3O8. However, the assessment wasn’t entirely accurate due to very few geochemical analyses undertaken, presence of some uranium that was irresponsive as radioactive anomalies and other technical reasons.

Nevertheless, Adavale Resources acknowledges the potential economic significance of Jubilee prospect and plans to work on an infill drilling plan to further explore and upgrade the uranium resource base.

Located in the south-central part of exploration license EL 5893, Mookwarinna contains drill-holes with ~1-km wide grid spacing. During exploration over time, the company recorded a wide anomalous zone of uranium enrichment in five drill-holes within a zone about 6 km in strike length within the Clayton Basin sequence.

A ground spectrometer survey and infill drilling of six gamma-ray logged holes were conducted on an area of 300 X 400 m, that returned anomalous uranium above the 100-ppm cut-off grade. The company has planned closer-spaced drilling, XRF, gamma-ray logging and geochemical analyses for this area.

Recently, the company released its Quarterly Activity Statement for the three months to 31 March 2019 and reported that no active field activities undertaken during the period; three tenements renewed for 2 years. The net cash outflow from operating activities stood at AU$ 66K, primarily including payments for exploration & evaluation along with administration and corporate costs. There was around AU$ 60K of net cash inflow from financing activities resulting from proceeds from the issue of shares (AU$ 50K) and borrowings.

Australia hosts one of the world’s most abundant low-cost uranium resources, the demand for which depends on the installed nuclear electricity capacity in countries prepared to sign up the Australian nuclear safeguards’ agreement. Over the years, the global demand for uranium has exceeded world production.

According to the World Bank data for 1990-2015, the alternative and nuclear energy use as a % of the total global energy use is illustrated below: 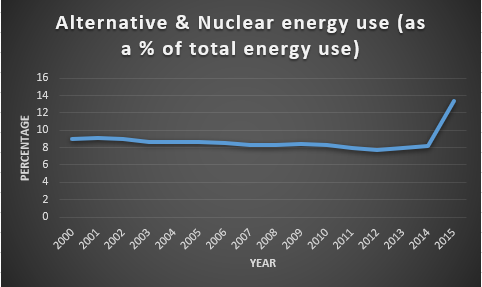 Adavale Resources is focussed on developing plans for the Lake Surprise Uranium tenement and actively seeking joint venture partners to further explore the area. Meanwhile, it is also looking to procure additional Mining and Energy assets to complement its growth strategy and move towards a positive cash-flow outcome.